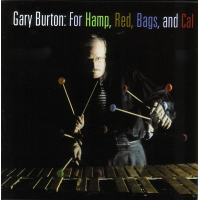 Gary Burton’s new release is a tribute record with a four-pronged twist, and with four different lineups. The vibraphonist’s honorees are Lionel Hampton, Red Norvo, Milt Jackson, and Cal Tjader — a grouping that provides a convenient historical survey of the vibraphone in jazz. While the result may not be a creative watershed, it definitely swings.

Three of the five Red Norvo dedications are a deliberate re-creation of Norvo’s classic 1950s trio. Russell Malone and Christian McBride play the roles of Tal Farlow and Charles Mingus, respectively. Some may find this kind of literalism off-putting, but the high-voltage scrappiness of these tracks — "Move," "Back Home Again in Indiana," and "Godchild" — is impossible to resist. Malone’s prowess in small, drum-less groups like these (think Diana Krall, Benny Green) is unfailing. (Check out his conga simulation on "Move.") The two Norvo originals at album’s end, "Hole in the Wall" and "Dance of the Octopus," feature Burton with his frequent duo partner, pianist Makoto Ozone. Here too, there’s a literalism that manages to be quite appealing. Burton plays xylophone and marimba — the instruments Norvo actually played on these tunes — and Ozone plays transcribed piano parts from the original recordings. While this might seem a recipe for a potted reenactment of another artist’s past glories, Burton and Ozone’s treatments have a searching, unpredictable, beguiling quality.

In comparison, the "Bags" and "Hamp" pieces, featuring McBride, Mulgrew Miller, and Lewis Nash, don’t have quite the same spark. Nor do the Tjader tributes, featuring Danilo Perez, John Patitucci, drummer Horacio Hernandez, and percussionist Luis Quintero. The arrangements, all by pianist Makoto Ozone, are tight and inventive, the playing top-shelf, naturally. But it’s on the Norvo material that Burton and his chosen players have the most interesting things to say.