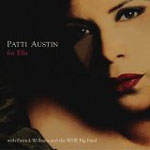 For her 16th album Patti Austin has decided to go with one of those you can't go wrong with it albums. A fine singer in her own right, Austin pays tribute to perhaps the quintessential female jazz singer of all time, Ella Fitzgerald, with a selection of 12 tunes, 11 of which are immediately associated with Fitzgerald. The one exception is the original "Hearing Ella Sing". Recorded live in Cologne, Germany and backed by the very large, and very good, WDR Big Band augmented by a 22-member string section, Austin shows a similar vibrancy, zest and unfailing sense of swing that made Fitzgerald's renditions of such up tempo tunes as "Too Close for Comfort" and "How High the Moon" quite special. Austin also treats the listener to that wildly controlled scatting that only a singer of Fitzgerald's artistry could pull off. To make sure that this album, while honoring the great lady of song, is simply not just a clone of what Fitzgerald used to do, Austin does a much blues inflected rendition of "Miss Otis Regrets" than one would hear from Fitzgerald. On ballads such as "But Not for Me", the large string section comes into play. One of the many splendid tracks on the album "The Man I Love" which Austin does with just Frank Chastenier's piano as backing. This recalls Fitzgerald's seminal recording sessions with such notable keyboard accompanists as Tommy Flanagan, Ellis Larkins and Jimmy Rowles. Make no mistake about it, Patti Austin does not try to be Ella Fitzgerald and that's good. This means she can do her own thing with songs that were Ella's which allows her to pay homage to the great lady of song and show her own unique talents at the same time. This album is likely to make many a list of top jazz vocal records in 2002. It's also likely to encourage many to revisit those Fitzgerald albums in their collections. Recommended. Visit Austin's Internet home at www.pattiaustin. com.

Too Close for Comfort; Honeysuckle Rose; You'll Have to Swing it (Mr. Paganini); Our Love Is Here to Stay; A Tisket a Tasket; Miss Otis Regrets; Hard Hearted Hannah (The Vamp of Savannah); But Not for Me; Satin Doll; The Man I Love; Hearing Ella Sing; How High the Moon