The Branford Marsalis Quartet: Footsteps of Our Fathers

By DAN MCCLENAGHAN
August 7, 2002
Sign in to view read count 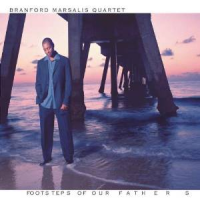 Footsteps of Our Fathers is the first great Branford Marsalis album since 96's The Dark Keys. Credit the label change; Mr. Marsalis has started his own record company, Marsalis Music. The results are stunning. His last few efforts on the major label were a bit thin. Sounded great on initial listenings, but they seemed somehow diluted, washed out. Fodder—ultimately, sadly—for the used CD bin. Perhaps it's the freedom afforded by owning the record company, and finally having the wherewithal to concentrate on the music instead of the bottom line, that makes this one such a jaw-dropping success

Branford and Company—Marsalis on saxophones, of course; Joey Calderazzo on piano; Eric Revis on bass; and Jeff "Tain" Watts on drums—bite into this music, and they don't let go of these on-the-alter sounds that might intimidate a less confident crew.

Credit has to go to Marsalis as a band leader—Calderazzo and Revis are relatively new to his band, but their contributions are unrestrained, exuberant, and as full of musical joy and energy and reverent (considering the classic material here) zest as anything out there. That doesn't just happen; the leader has to allow it. The leader and the freedom afforded by the smaller label.

The band remains faithful to the originals, but still infuse them with their own musical personalities and personal ebulliance. "A Love Supreme" is transcendant in their hands, a soaring prayer; in execution it stands up well beside the original. No small feat.

Thoughtful and eloquent liner notes by Defeayo Marsalis, too. An indispensible disc for fans of these classics songs; a musical awakening for those unfamiliar with them.