By DOUGLAS PAYNE
August 1, 1997
Sign in to view read count 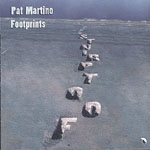 Footprints was originally released as The Visit on Cobblestone Records in 1972 then reissued on Muse under its current title in 1975. This superb record was Pat Martino's sixth as a leader and his first away from the Prestige fold. This tremendous quartet session was recorded March 1972 when the guitarist was still only 27 and featured the substantially driving input from bassist Richard Davis, second guitarist Bobby Rose and drummer Billy Higgins. The disc was conceived as a personal tribute to the memory of his friend, Wes Montgomery, and while it certainly has links to its inspiration, Footprints clearly outlines some of Martino's most beautiful traits—crisp, logical, narrative lines; nothing hurried or studied but, rather, a most thoughtful statement of heartfelt intention.

The disc, recently reissued on CD by 32 Jazz, begins with Martino's rousing "The Visit," a 6/8 blues piece that suggests a much more adventuresome Wes-like appeal. Richard Davis assumes the role of dueling co-leader rather than timekeeper here and throughout. And it really makes a difference too.Montgomery's "Road Song" is explored to show the similarities—and differences—in the two guitarist's styles. Martino, a player of many ideas, traverses Wes's octaves and performs single-note patterns that would leave Montgomery green with envy. The blues balladry of Wayne Shorter's enchanting "Footprints" gets one of its most haunting, ethereal performances ever in Martino's free-for-all exploration. Martino glides over his fretboard effortlessly while Davis and Higgins work a simpatico gypsy groove (Davis has a provocative solo here too). Bobby Rose is heard, ever so rhythmically, challenging Martino to find new paths, making one wonder where the Gabor Szabo/Jimmy Stewart team would have taken a gem like this. The program is rounded out with the excellent performances of Michel Legrand's "What Are You Doing The Rest Of Your Life," "Jobim's "How Insensitive" and the Dietz/Schwartz standard "Alone Together"—a collection of crowd-pleasing tunes that would fit easily into many of Wes Montgomery's Verve dates.

During a 30-year recording career of many highs and a few lows, Footprints stands as one of Pat Martino's very best. The musicianship is superior, dynamic and attention grabbing. Best of all, this ideal quartet's interplay is outstanding and often astounding. Very highly recommended.