By MARK CORROTO
February 25, 2017
Sign in to view read count 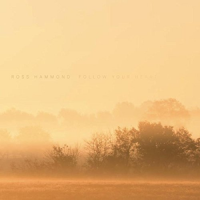 Have you doubted the existence of God? Wondered if there is a place called heaven? You may react to those questions with an emphatic "no," or, if your answer is you have "no doubts," you posses a substance called faith, an article beyond reason and knowledge. Listening to Follow You Heart by guitarist Ross Hammond bolsters the argument for this thing called faith.

Hammond's solo acoustic set, recorded in a Sacramento church, opens with "Sinner Man," and a single blues drenched note. Born in the Delta, that single note isolated could also be heard as the Muslim call to prayer. But then again, imagination is a powerful thing. The song draws from the spirituality of the blues. Just as the Delta bluesmen did. Just as John Coltrane did. Hammond crafts guitar music from the same roots that Bill Frisell, Petr Cancura, and Pat Metheny draw from.

Follow You Heart was preceded by another fine solo guitar recording, Flight (2015), but his music is also quite diversified. He has recorded in duo with tabla player Sameer Gupta Upward (2016), drummer Grant Calvin Weston Blues And Daily News (2014), and with multi-reeds musician Vinny Golia Ross Hammond And Vinny Golia (2016).

Here, Hammond plays roots music. His Appalachian blues performance has the same foundations as Albert Ayler's folk music. Like a fine improvising saxophonist, he can keep all the plates spinning at once. His "Life In 3D" reverberates multi-phonics just as a circular breathing saxophonist would. Compositions like "Blues For Rusty Moses," and the the Civil Rights inflected "I Ain't Scared Of Your Jail," draw deep from the soul, where a simplicity of notes are a plaintiff cleansing prayer. The title track, "Of Course We Will (Follow Your Heart)," is a reaffirmation of of the human spirit. Hammond may or may not believe in the afterlife, but he certainly creates ethereal worlds here on Earth.

Sinner Man; Of Course We Will (Follow Your Heart); Whirlpool; Lake Tahoe Waltz; Life In 3D; Blues For Rusty Moses; How Does A Monkey; Write Its Song?; Blues For Bob Feathers; I Ain’t Scared Of Your Jail.