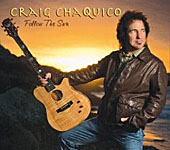 Back when he was pumping out power chords for Jefferson Starship (later trimmed down to simply Starship) guitarist Craig Chaquico performed on one of the band's biggest and last hits, "We Built This City." That song would later top VH-1's The 50 Most Awesomely Bad Songs...Ever as the absolute worst rock song.

Chaquico didn't deserve the blame for that song's cheesiness. When he was playing rock n' roll he was a pretty formidable guitarist and when he went solo he surprised doubters with his debut, Acoustic Highway (Higher Octave, 1993), displaying his New Age and contemporary jazz skills.

On his first album in four years and on a new label, Chaquico moves further into the smooth jazz camp in search of greater commercial success, but without spurning his spiritual roots in both Latin and Native American music.

Which makes Behind the Sun something of a balancing act for Chaquico. Things start off fine with "Lua Da Mae" and "Azores Lisboa," two sizzling hot slabs of the kind of Latin jazz-rock that once was the staple of Carlos Santana, but has been mostly abandoned in recent years. Things proceed nicely right up until "Lights Out San Francisco," an updating of the original version from Once In A Blue Universe (Higher Octave, 1997) that squanders Peter White's Spanish guitar with corny lyrics and thin vocals from Rolf Hartley.

Chaquico is an interesting guitarist with a lot of ideas, but even he can't make a cover of Kenny G's "Songbird" intriguing. It's an overt tribute to the sax man's ability to move product, but "Songbird" is to jazz what "We Built This City" is to rock; a triumph of slick commercialism over creativity.

Things pick up nicely with "The Coast of Orion," "Island Breeze" and the closer, "Solar Wind," where Chaquico focuses on just playing instead of crafting radio-friendly fodder.

As an artist who plays with power, finesse and passion, Chaquico's recordings never fail to impress repeatedly, but those moments are scattered sporadically throughout Behind the Sun. Some curious choices in material make this a worthy addition for fans, but others may just wonder if this is the same rock n' roll dude from the '80s, only with no mustache and shorter hair.