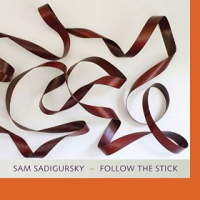 After spending nearly ten years with the four Words Project albums (see here, here and here for three of them), reedman and multi-instrumentalist Sam Sadigursky has decided to concentrate on clarinet, returning to purely instrumental music with Follow The Stick.

Starting initially with a trio comprised of pianist Bobby Avey (who work with Dave Liebman's latest group is stellar; see Samsara , and The Puzzle) and drummer Jordan Perlson, the group was expanded to include vibraphonist Chris Dingman. In today's times, the clarinet ("the stick") gets no respect as a jazz instrument, whereas back in the Swing Era, three of the most popular Big Bands, that of Benny Goodman, Artie Shaw and Woody Herman were led by stellar clarinet players. The first two also led smaller groups which included vibes, so adding vibes was something in Sadigursky's ears already. Trumpeter Jason Palmer (heard most recently on Noah Preminger's live album, The Pivot).

The clarinet is a notoriously difficult instrument to master throughout its range. The "stick" in the band and album name refers not only to the clarinet, but also to a conductor's baton, and so the title/name has a sense of "follow the leader" about it, but this is more than a little tongue-in-cheek.

The pieces are mostly originals, using a mix of newly composed pieces and older pieces which Sadigursky brought to like, but there is also an extremely interesting arrangement of the Jerry Gray/Glenn Miller gigantic hit, "String Of Pearls." The stylistic range, as well as the emotional range, is quite wide and, with the tracks taken as as a set, provide a very satisfying listening experience.

The overall impression is of a very tight band whose members are given much freedom within the structure of each piece. Avery feels like the core of the group, supporting both it and the leader. The bass is not missed one bit as Avery's strong left hand fills the bottom. Dingman is excellent and supplements Avery without colliding with him. Palmer adds a second lead voice to four tracks with his wonderfully soft, but full trumpet sound.

Upbeat tunes ("Fast Money," the odd "String Of Pearls" and especially "Do The Dance") dominate the first half of the record, with "Austerity Measures" and "Looks Can Be Deceiving" providing a counterbalance by slowing things down and intensifying the emotional content. The second half contains "Deadly Sins" and "Math Music" which are both new compositions which explore compositional techniques that create a more heady feeling. However "Heart," the longest track is achingly beautiful and ethereal, floating on the sounds of Avery and Dingman, with Sadigursky laying down the very pretty melody in the lower register to begin.

With excellent compositions and fine playing by the band, Follow The Stick is extremely enjoyable again and again.