By KEN FRANCKLING
October 3, 2004
Sign in to view read count 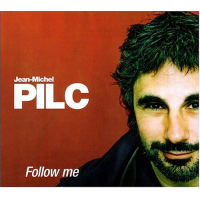 French pianist Jean-Michel Pilc has made a name for himself as an adventurous musical explorer. Follow Me is his first solo CD after four trio recordings and one large ensemble project.

The opening title track is sort of an invitation to follow him through his many moods. He shows himself to be a musical sculptor, chipping away until he's left with what a tune means to him. "Follow Me" and "Happiness Seven"—among four originals scattered throughout the recording—are wistful and introspective, played with more than a hint of classical delicacy.

His instrumental cover of the Edith Piaf hit "Les Amants d'un Jour" captures the intimacy and "cherished moment" mood of the original. Pilc's versions of "St. Louis Blues" and the New Orleans-associated "St. James Infirmary" are bright and playful, as he contrasts trilling melodic progressions with thundering bass chords during journeys through these traditional American jazz and blues staples.

Rodgers and Hammerstein's "My Favorite Things" takes on a customary Pilc flavor with varied tonal colors. It opens deep and dark with a mere hint of the song to come, then bursts with sustained melodic touches from the piano's lower register. He finds many new facets to reveal and accentuate within the song before winding down with a soft and straight ahead reading of the core melody.

"If I Should Lose You" is brighter by contrast. Note that Pilc inserts a hint of "Autumn Leaves"—a tune that he explores in greater detail a bit later in the CD. Pilc adds a twist by whistling the melody over his own piano comping and accents on "One For My Baby." It's an artful touch.

Follow Me also includes a shimmering cover of Bill Evans' "B Minor Waltz" and a brief (90-second) take-no-prisoners take on "Oleo" by Sonny Rollins. The classic "Ain't Misbehavin'" has mysterious, joyous and child-like moments as Pilc toys with many colorings.

His solo program also includes two originals—the dark and off-kilter "The Racoon" and "Beaver Dam"—as well as reworkings of the classic French pop song "Vous Qui Passez Sans Me Voir" and a newer French standard, "Les Copains D'Abord," which he whistles to an end.