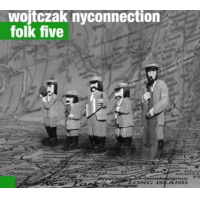 Polish jazz has a long history, and includes many more players than the widely known Tomasz Stanko or Krzysztof Komeda. A deeper, and much earlier influence than American jazz coming to Poland is that of the folk music indigenous to Poland itself.

Reedman (saxophones and bass clarinet) Irek Wojtczak & The Fonda-Stevens Group, arguably a free player, relates in the liner notes how, in his thirties (when else?), he wanted to reconnect to his musical roots. He found folk violinist Tadeusz Kubiak whose playing exhibited a direct simplicity that enabled Wojtczak to dig deeper into what he, and his music really were.

The primal and even atavistic Folk Five is the result of his investigations and efforts. Supporting Wojztczak are the four members of the Fonda/Stevens group (bassist Joe Fonda, pianist Michael Stevens , trumpeter Herb Robertson and drummer Harvey Sorgen).

One might ask how Americans could become so comfortable and at ease with Polish music. Fonda and Stevens have been playing in Poland for the last ten years and recorded a live gig with Wojtczak about six years ago, and thus have been able to internalize the Polish ethos.

Even for someone who has not heard any Polish influenced jazz, this album has an immediacy and a combination of delicacy and power that pulls one in. Polish folk themes are either directly quoted (Ale Zagrajzke Mi Kowolka (Play The Kowal Dance For Me) and then improvised upon, or the essence of the melody is used as the starting point (Pod Gazem (Polka) (Tipsy (Polka Dance).

It is obvious from his first notes that Wojtczak has deep emotional ties to this music, and his fierceness, intensity and deep sensitivity carry the day.

Fonda, always a powerful bassist, is more than up to the task of pushing and being pushed, while Stevens shows his range by his energetic comping and lyrical soloing. Robertson is almost Wojtczak's ethnic double when staying close to a folk theme, but also can play as free as a bird, while Sorgen's rhythmic support is both sensitive and forceful when needed.

Folk Five is important both for what it succeeds in accomplishing musically and as an entry point into the rich music that is Polish jazz.

About Irek Wojtczak & The Fonda-Stevens Group