By GLENN ASTARITA
October 18, 2005
Sign in to view read count 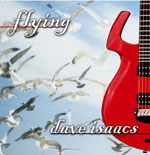 Guitarist Dave Isaacs leads the New York City-based Jackalope Junction band, and with this trio release he improvises melodies within the context of interrelated music genres. Primarily performing on electric guitar, Isaacs works with his rhythm section to navigate through country-blues, rockabilly style swing, and other mediums for him to strut his stuff. On "Front Porch Swing, he overlays a Hammond-B3 groove to complement his jazzy single-note lines. The guitarist alters his sound and mode of attack, primarily to raise the pitch or place a bit of emphasis on the band's ascending movements. To some extent, the hybrid country-swing vamp led by Isaacs' slick-picking maneuvers should appeal to fans of the late guitar-slinger Danny Gatton.

Isaacs lays it all out rather nicely as he periodically implements a bottle-neck for some hot n' nasty, wailing blues licks. The guitarist tones the session down a few notches during his nimble-picking acoustic work on "Waterfall. But he also slams the pedal to the metal in spots.

Overall, he conjures up a tasteful series of events, often dappled with attractive harmonic patterns. And his ability to ad-lib the melodic content of these pieces, framed upon structured grooves, transmits his conviction and astute musicality.