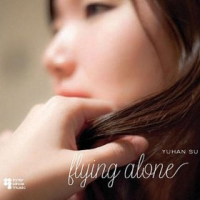 Flying Alone is Taiwanese vibraphonist Yuhan Su's debut, a 2011 Berklee College of Music graduate who put together an international band to record the album in March 2012. As well as vibraphone, Su plays malletkat, and sings on two tracks. The personnel have been well chosen; although not long together at the time of recording, they are highly compatible, sounding both relaxed and comfortable playing together.

The ten tracks are all original compositions by Su, written in the eighteen months prior to the recording. All are refreshingly subtle, consisting of long melodic lines rather than the tight snappy riffs produced by many writers who have been taught composition in college. Their freshness and lack of clichés makes them sound like the work of a more mature composer and promises much for the future from Su. Crucially, all the compositions and arrangements act as good springboards for the band to solo in an easy, natural fashion, avoiding the rigid stereotype of the head-solos-reprise format.

All the players are accomplished soloists—surely a criterion for their being chosen for this band—without any of them outstaying their welcome or dominating proceedings. Not least, this is true of Su herself, whose vibes are integrated into the overall band sound, occasionally bubbling to the surface for special attention. When not soloing, much of the time the vibes and piano work together as part of the rhythm section, contributing to a soundscape which has enough detail to be interesting in its own right, even when there is not a lone soloist over the top of it.

On "Comfort Zone" and "Necessaries," the two tracks on which Su sings in a pleasant melodious voice, the vocals serve to add variety to the album. But it is as a composer, instrumentalist and bandleader that she is surely destined to achieve most recognition, with her vocals always available to fulfill the supporting role. After the recording of Flying Alone was completed, Su raised over $4000 via Kickstarter in order to fund its mixing, mastering, graphic design and packaging. Her backers must be very satisfied with the results of their investment. On this showing, it seems highly unlikely that Su will need to use that route to fund future albums. The future is bright for her and this band.

Flying Alone; There is Something in the Bottom of the Bottle; Drive; Comfort Zone; If You Stay; Necessaries; Difficulties; Sputnik Sweetheart; Origin; Bian Fu.