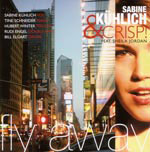 Jazz vocal enthusiasts who are looking for something different might want to try this new German release featuring the singing of Sabine Kuhlich, which also has the added bonus of three guest appearances by the much-venerated Sheila Jordan.

Originally from Gera, Germany, Kuhlich was educated in Europe and the US; in addition to singing, she also plays piano, saxophone and clarinet. After her debut album, Kuhlich spent six months in New York, and two of her compositions from that period, "Uptown Local" and "Morningside Heights," appear on this album.

Her quartet, known as Crisp, consists of Tine Schneider (piano), Hubert Winter (tenor sax), Rudi Engel (bass) and Bill Elgart (drums). The album begins with a smoky cabaret reading of the title tune, then picks up steam with another original, "And Even More," an adaptation of Sarah Vaughan's scat solo to "All Of Me," for which Kuhlich penned lyrics.

The album offers something for everyone in a linguistic sense. Although the majority of tunes are sung in English, there are three songs in German and one in French. The latter, "Chanson de Delphine," is likely familiar to most as the jazz standard "You Must Believe In Spring." It was written by Michel Legrand and Jacques Demi for the '60s French film Les Demoiselles de Rochfort (otherwise known as The Young Ladies of Rochford), a followup to Demi's hugely popular The Umbrellas of Cherbourg.

Perhaps it is no coincidence that Kuhlich's style sounds very much like Sheila Jordan's on some of these tunes. On her three appearances, Jordan, who was 77 years at the time, seems to inspire both the musicians and Kulich. On Charlie Parker's "Ornithology," the two singers spontaneously trade remembrances of when they first heard Parker's music. Jordan was a fourteen-year-old in Detroit and Kuhlich was fifteen in East Germany. "Delicious and Lovely" is a bebop version of Victor Young's standard "Beautiful Love," with Kuhlich and Jordan duetting and trading scat choruses. On "How Deep is the Ocean," vocalese supports Hubert Winter's tenor sax statement.

Visit Sabine Kulich on the web.