By HRAYR ATTARIAN
September 25, 2009
Sign in to view read count 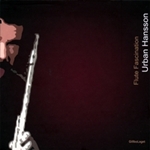 Instrumental jazz duet recordings that are not piano-based are a rarity; one that comes to mind is guitarist Jim Hall and bassist Ron Carter's Alone Together (Milestone, 1972). But a disc made up of exclusively flute "conversations" with other less commonly used instruments (at least in this setting) is almost unheard of. Swedish flutist Urban Hansson pulls off this daunting task with some degree of success on Flute Fascination, as he utilizes different partners on each track, ranging from a pianist (who also plays harmonica) to a bass saxophonist.

That Hansson has mastered the art and skill of not only playing but improvising on the flute is unquestionable. But after a few bars and interchanges, the tunes feel more like academic exercise than artistic expression, especially during songs that feature two flutes, and the last track, with solo flute backed by propeller sounding electronics. Almost all the pieces drag on a tad too long, which is not to say they lack creativity, but that their cerebral, almost mathematical quality, overwhelms the emotional content of the music.

The songs are a mix of standards and Hansson compositions. The music is in the post bop vein with some flirtations in free improvisation, with a uniformity of theme and quality throughout. The side musicians are well-matched with Hansson, but those that really standout are bass saxophonist Jonas Kullhammar and bassist Lars Ekström.

On the dual flute tracks, Hansson is the dominant voice, with his deeper, breathy sound and unique playing. He also takes the spotlight when playing with organist Pierre Swärd and drummer Uffe Flin,k who uses brushes on a box, yet Hansson plays more as an equal with the two guitarists—Jonny Johansson and Andreas Oberg.

This interesting CD by a master jazz flutist is a one-of-a-kind work; although highly creative, it unfortunately plays more like a textbook for students of the instrument rather than a musical opus that would appeal to a larger audience.

All Blues; I Got It Bad; Winds Over Tannisby; All Of Me; All The Things You Are; Monk Delight; Sweet And Lovely; Take The A-train; Body And Soul; Flute Fascination.