By MARK CORROTO
November 1, 2002
Sign in to view read count 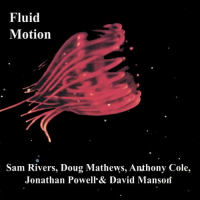 Two Questions: Who are these guys? And what are they doing with Sam Rivers?

Sorry for the New York-centric approach, but pressing the play button on this disc by Fluid Motion had me scrambling for the lineup. This quintet comes out kicking ass and I hadn’t taken in any names. Except, of course for Sam Rivers, the seventy-something saxophonist, a pillar in the 1960’s avant- movement and New York loft scene of the 70s. After his brief but stellar Blue Note career he moved back to His Orlando home in the 1980s. From there he surrounded himself with amazing local talent, some whose day jobs are with the Disney studios, others who are local music educators. His late 1990s RivBea Orchestra records for RCA Inspiration and Culmination were bolts of lightning from this seldom heard idol. Before these two discs, he hadn’t been seen (or heard) near a major label in nearly twenty years.

Maybe that’s why this disc shocks. Rivers is the big name in this quintet, but he isn’t the focus. Trombonist David Manson is, in that the quintet is playing all of his compositions. The band has drummer Anthony Cole and bassist Doug Mathews, two musicians familiar with Rivers from those RivBea Orchestra records and a hip trio session from 1996, Concept (RivBea). Manson adds trumpeter Jonathan Powell and there is something special happening here.

Manson’s compositions walk the line between post-bop and free with the intensity centered in the groove. Certainly you can compare this band to both Roy Campbell's projects and the Vandermark 5. Jonathan Powell conjures the same bluesy tones as Campbell, reaching back to Lee Morgan and Don Cherry for inspiration. Manson’s trombone goes toe-to-toe with both Rivers and Powell, giving up nothing in the exchange.

Rivers for his part fits nicely in this group. He trades easily with the younger players, easing off nicely on the ballad “Whispers” and surging, tenor in hand, inside on “Pengquan.” While the frontline is searching outward, the rhythm section centers the groove throughout and their groove is nicely mixed in the forefront.

Manson does everything right.