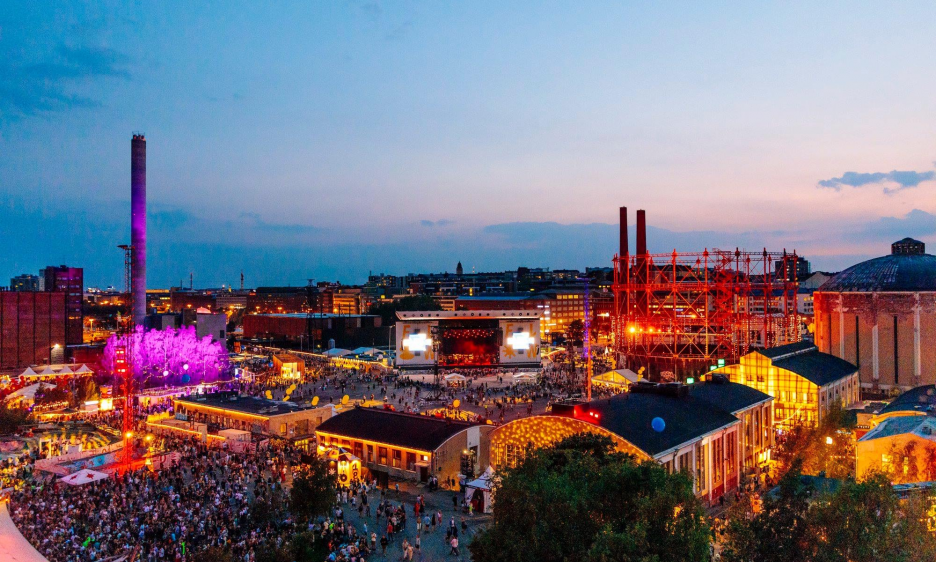 Once the fizz and thud of a modern outdoor festival fades, in my case behind numerous trees and double glazing 1½ miles away, one wonders how much art has been expended with such a concentration of energy put out. Flow Festival, based in the steampunk style former power station a mile from downtown Helsinki, has now been on the Scandinavian cultural calendar for 14 years. Judging by the ticket sales, as well as photographic evidence, its spread along the shore behind the adjacent modern power station, just opposite the Fish Harbor metro station, proves it to be going from strength to strength.

Now branded an 'arts boutique festival,' the organizers have moved to provide way more than the original concept of just a display of the latest electronica and alternative pop acts. Despite this year's musical attractions of the UK's Arctic Monkeys, and stateside's Kendrick Lamar, Lauryn Hill, Patti Smith and more, for many the appeal is as much in the branding as in the bands. With an age appeal crisscrossing all generations, the event still marks a way-stage in the unstoppable decline of the Scandinavian summer that this year blazed unremittingly through the whole of July. Amidst the vegan restaurants, play areas and chill-out rooms are the regular crop of Springsteen or Bauhaus tee shirts, but also many trousers suits and high fashion accessories; among the 84,000 visitors one must be seen!

As always there was an authentic jazz element to the show and again this year the prime medium size venue, the 360 degree Balloon Stage saw a range of Finnish acts. First was the classic but recently reformed Olli Ahvenlahti New Quartet playing melodious but refreshing post bop. On Saturday the country's principal big band UMO played alongside rated trumpeter Jukka Eskola, ever energetic Mopo powered though an afternoon set, while later in the evening Laura Naukkarinen (Lau Nau to the modern audience) sang her way through an enchanting selection of her own pieces accompanied by bowed lyre virtuoso Pekko Käppi, percussionist Samuli Kosminen and Swedish pianist Matti Bye. Sunday's lineup featured over 15 acts and despite to rapidly shortening daylight included Kamasi Washington and his band playing two stellar sets to a packed early evening audience.

Sustainability is virtually an alternative title for the festival, and with probably 35% of the visitors attending by bicycle the promoters are keen that the show continues for the foreseeable future. A force of about a thousand volunteers are involved in set up, receiving compensation in the form of ticket passes which his year the Finnish taxman has deemed liable! But despite such setbacks the festival will no doubt be back in August 2019 with new ideas, maybe new partners, and certainly an extensive selection of new music. This is a truly high profile regional event, but on a human scale, as evidenced by the minute's silence held on Sunday in respect for the sudden accidental death of local reporter and performer at this year's Flow, Perttu Häkkinen. This interlude, and this event, was well respected by all.