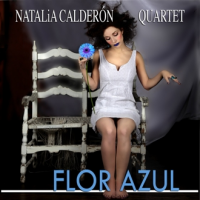 If one were to examine the proliferation of jazz on a global scale, Spain might be a good place to start. Though it is recognized that Spanish music, primarily flamenco, has achieved a strong foothold with jazz aficionados, there are numerous artists in Spain that are performing jazz on a regular basis and their ranks appear to be growing. With the release of Flor Azul, vocalist, songwriter, and producer Natalia Calderón will be acknowledged as a rising talent in the Iberian jazz movement.

With years of vocal studies and the accumulation of an impressive resume of performances, Calderón is exceptional in that she composes lyrics in her native Spanish, as well as in Portuguese and English. Having penned all but one of the songs on this album, she weaves from ballads, blues, and sambas to up-tempo numbers with ease.

Special appreciation on this record goes to pianist Marta Sanchez for displaying ideal accompaniment with alluring technique. Sanchez should positively be included in those Spanish jazz artists which are making a name for themselves based on their talent, feeling, and knowledge of the music.

From the the opening "Danays," Calderón and Sanchez are in total synch throughout the process, each giving the other the proper amount of space and time to allow the progression of the songs. "Nada Me Retiene" and the Brazilian tinged "As Ondas" are standout numbers, as are the English renderings of the ballad "Pictures" and the soft standard "Don't Go To Strangers," which includes a virtuoso bass background by David Gonzalez.

Natalia Calderón is one of those confident musicians whom has quietly paid his or her dues acquiring an expanding audience which, propelled by the production Flor Azul, will take her music far from the Spanish border to an international level.