By HRAYR ATTARIAN
September 20, 2007
Sign in to view read count 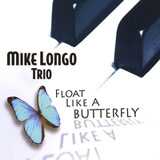 When an essential element is missing from a recording, even the highest quality of musicianship cannot make up for its absence. There is no doubt that Mike Longo and his trio, featuring bassist Paul West and drummer Jimmy Wormworth, are musicians and improvisers of the first order, but on Float Like a Butterfly one cannot shake the sense that an important ingredient is absent.

On most of the pieces one waits for a horn player to enter the scene and lead the group, because the trio's playing is so understated as to be that of a rhythm section supporting an absent frontline of one or two horns. Only on "Witch Hunt does the trio flex its musical muscle and show its full talents. There is a hint of that energy again on "Here Tiz, but alas it dies out quickly.

The rest of the tracks, both standards and original compositions, are extremely laidback, with solos that rarely venture far from the melody line and quiet but solid, mutual support. This becomes even more disappointing when one considers the reputation and skill involved. This is not to imply that the musicians involved are not masters of their trade; in fact, their playing is so complementary to one another as to seem telepathic.

The liner notes indicate that the CD is dedicated to Oscar Peterson, but the players have their own sound, and the music lacks the bluesy energy that is so characteristic of Peterson's piano-dominated trio sessions. The music created by this talented trio is impeccable, and would have served as a great rhythm backing but unfortunately, with rare exception, does not engage enough to stand on its own two feet.

Girl of My Dreams; Dancing in the Dark; Witch Hunt; Diminished Returns; Tenderly; Blue Spirits; Everytime I See You; It Could Happen to You; Laura; Here Tiz (Impromptu); Evidence.