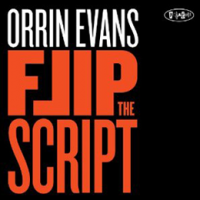 In the wrong hands, the contemporary piano trio can sound like a retread of piano trios since the dawn of popular music. In the right hands it remains a potent force: exciting, engaging, full of imagination and capable of flights of invention. The hands of Orrin Evans are the right hands. The Philadelphia-born pianist is approaching 20 years as a recording artist and, by the sound of Flip The Script, he's in one of his most creative periods to date.

Evans' other projects include the Captain Black Big Band—whose eponymous 2011 Posi-Tone debut was a full-on big band blowout—and Tarbaby, a small band with an edgier, darker, sound whose End Of Fear (Posi-Tone) was one of 2010's finest releases. Flip The Script is a more straight-ahead recording, but it still shines with an inventiveness and an emotional directness, heightened through the strong interplay between Evans, bassist Ben Wolfe and drummer Donald Edwards.

Much of the music on Flip The Script is characterized by a high-energy drive, with tunes such as "Clean House" and "Flip The Script" utilizing a fast-paced, aggressive and breathtaking approach. "The Answer" shares the drive of the faster numbers, thanks especially to Edwards' drums, but the pace is reduced a little on this swinging tune.

The slower tunes are equally inspiring: speed and strength give way to control and emotional engagement from all three players to form a set of resonant and powerful melodies. "Big Small" is a very slow blues on which Evans' percussive lines and Wolfe's fat, lowdown, tones contrast with Edwards' lighter patterns. "When" is more downbeat—a romantic, flowing, ballad.

Evans includes four contrasting cover versions. The slightly fractured rhythms and repeated phrases of "Question," by Tarbaby bassist Eric Revis, give the tune a strong bebop feel as well as a sense of fun. Evans invests "Someday My Prince Will Come" with a bluesy mood, an air of uncertainty that eschews the swing and optimism of Dave Brubeck or Bill Evans' versions to hark back to the tune's first appearance on the soundtrack of Snow White And The Seven Dwarfs (1937).

Two soul tunes also put in an appearance. Luther Vandross' "A Brand New Day" swings strongly, Edwards and Wolfe driving the rhythm as Evans opens up with hard-hitting but melodic piano. Evan's solo performance of Gamble and Huff's "The Sound Of Philadelphia" (the theme tune to Soul Train) is exquisite. Another slow, almost funereal, tempo finds Evans exploring new avenues within the song, drawing out a reflective melancholy, a longing for times past, that is genuinely affecting.

Evans already has an exceptionally strong discography, so to describe Flip The Script as one of his finest is to give it high praise indeed, which is exactly what it deserves. It's going to take a lot of pushing and shoving to get Flip The Script out of the 2012 Best Of lists.

Question; Clean House; Flip The Script; When; Big Small; A Brand New Day; TC's Blues; Someday My Prince Will Come; The Answer; The Sound Of Philadelphia.