By BRUCE LINDSAY
February 19, 2011
Sign in to view read count 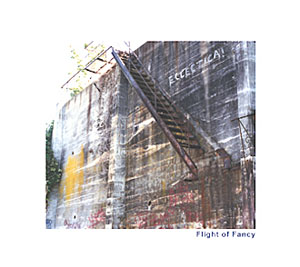 Eclectica! is a European string quartet that brings together four exceptional musicians from the realms of jazz and classical music. Flight Of Fancy, the band's second album, continues with its fusion of musical genres, mixing classical, pop and original tunes in a beautifully performed collection.

String quartet is an accurate description of Eclectica!, but not one that does justice to the depth of the band's talents or its musical diversity. The combination of strings—violin, cello and two acoustic guitars—is not the standard one, while the distinctly English sound of violinist Lizzie Ball's vocals adds an additional dimension to the music.

Of the four players, cellist Bernard Gregor-Smith is the musician with the deepest background in classical music. A founding member of the Lindsay String Quartet, he was part of that group for 40 years. Ball is the leader of Nigel Kennedy's Orchestra Of Life, as well as a performer with the Ronnie Scott’s All Stars. Guitarist Pete Oxley is firmly rooted in jazz, while Nicolas Meier moves between the worlds of jazz and heavy metal with ease. The two guitarists complement each other well, Meier's lead lines immediately grabbing attention but Oxley's rhythm playing just as vital to Eclectica!'s sound, and his solo on Meier's arrangement of Vittorio Monti's "Czardas" is one of the best on the album.

Flights Of Fancy's original tunes are written by Oxley or Meier. Oxley's "Sands of St Ives" features Gregor-Smith's cello and Ball's violin to great effect. The beautiful "A Rose in the Pyrenees," by Meier and his wife Songul, is a flowing and relaxing tune that immediately conjures an impression of tranquility. Meier's "Vatan (Homeland)" is more varied, its mood shifting between contemplation and urgency.

Eclectica!'s selection of covers leans heavily towards the familiar. Nikolai Rimsky-Korsakov's "Flight of the Bumblebee," Stevie Wonder's "Isn't She Lovely" and Antonio Carlos Jobim's "Corcovado" are all immediately recognizable. The quartet plays each tune beautifully, but a group this talented could have taken more chances, creating more innovative arrangements or choosing less well-known songs. Ball sings warmly on "Isn't She Lovely" and "Corcovado" but she's most effective on Joni Mitchell's "A Case Of You." This is not an easy song to perform, but Ball handles the lyric comfortably, capturing the sense of longing and desire in Mitchell's words.

Eclectica! prides itself on its ability to draw from an eclectic and wide-ranging repertoire, and it manages to do so without losing the fundamental characteristics of each style. Flight Of Fancy is a beautifully crafted album from a quartet of highly talented musicians.

Flight of Fancy; Yemin (The Pledge); A Case Of You; Czardas; Sands of St Ives; Isn't She Lovely; Flight of the Bumblebee/Adagio; A Rose in the Pyrenees; Vatan (Homeland); Corcovado.