By JAKOB BAEKGAARD
January 16, 2018
Sign in to view read count 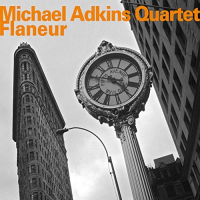 Canadian saxophonist Michael Adkins' third album, and his second on Hat Hut, Flaneur, arrives in a shroud of mystery. Back in 2008, Adkins released his debut for Hat Hut records, Rotator, but as it is turns out, he recorded another album the same year. It seems incredibly prolific, but it took ten years before it was released and here it is.

Flaneur shows up as a gift out of nowhere, ten years unaccounted for, but in this digital age of mass-information there is certain beauty about it all -like finding an unpublished literary masterpiece in a dusty old suitcase. Now the case is opened, and the content is worth discovering.

Writer Brian Morton gets to the heart of matter when he suggests that the music could be situated in a third space that neither belongs to up-tempo numbers nor ballads. Taking the title of the album as a starting point, the music strolls, but in a way that is both casual and determined. Adkins plays with the cool fire of another tenor, Mark Turner, and like Turner he is able to create an elaborate musical architecture that is also melodically clear in its development.

Adkins is not the only one voice in a quartet that also includes the late legend, drummer Paul Motian, and pianist Russ Lossing. Lossing is not present from the beginning. Instead, the opener "Archives" starts as a trio-piece with bassist Larry Grenadier. There is a curious break in the composition around the five-minute mark where the music seems to end only to start up again -the in-betweenness of stillness and movement becomes quite literal here. When Lossing enters on "Hard Request" with crystalline piano motifs, the music is taken into a dreamy sphere, but there is not the sense of stopping entirely. Instead, these four musicians keep the music in poetic movement.

So, to return to the question of context. Does it really matter when and how the music was recorded and who is Michael Adkins? Listen to this music and you will know it.