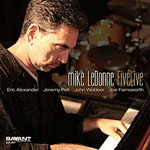 Man, where the heck was I on Oct. 19th-20th 2007? I can't recall offhand my exact whereabouts, but it doesn't matter because I certainly wasn't present at the popular Upper West Side jazz haunt Smoke to experience the excellent sets that resulted in pianist Mike LeDonne's new live release FiveLive.

LeDonne, who holds down a weekly gig at Smoke as the leader of a Hammond B-3 organ-driven groove session, delivers an extremely satisfying and eclectic hard bop experience with this record, one of the best live releases of the year so far. Joined by four of New York's finest professional players that you're likely to catch around the city in various combos on any given night, LeDonne and crew stretch out on eight tracks consisting of both jazz standards and LeDonne originals, as well as one imaginatively reworked pop tune: Stevie Wonder's "You and I." That track definitely serves as the jewel of this disc. Not only is it a highly original and refreshing selection to cover, it gets an equally unique arrangement that features three different tempos over the course of its eight-minute running time.

LeDonne gets strong support throughout from his bandmates, featuring the horns of Eric Alexander (tenor sax) and Jeremy Pelt (trumpet), as well as the rhythm section of John Webber and Joe Farnsworth. The group sounds extremely pleased and this is most apparent on the slightly modal, up-tempo disc opener "Encounter," a LeDonne-penned re-imagining of "Love For Sale." An additional highlight is yet another interesting version of a standard in LeDonne's reinterpretation of Dizzy Gillespie's "Manteca."

The pianist does his best personal work of all, however, on a way-slowed down, dreamy reading of Ellington's "I've Got It Bad (And That Ain't Good)." Again, had I been at Smoke during this romantic number (and in the proper company), it could have turned into a very magical night! All of the selections are at least six minutes, giving the musicians plenty of time to give those in attendance and now (most importantly) the listeners of this CD their money's worth and more. This album confirms the fact that Mike LeDonne is absolutely one of the must-see jazz artists working in the city today.

Track Listing: Encounter; You and I; Hands; Good Times; Manteca; I Got It Bad (And That Ain't Good); Little M; Bleeker Street Theme.