By BRUCE LINDSAY
November 13, 2011
Sign in to view read count 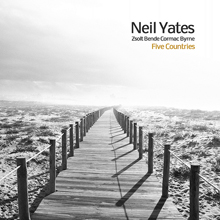 Trumpeter Neil Yates has an extensive discography, covering an impressive range of musical styles, but Five Countries is only his second album as leader, and his debut for Wales' Edition Records. Joined by guitarist Zsolt Bende and percussionist Cormac Byrne, Yates has produced a melodic and atmospheric collection of tunes which fuses jazz and folk music.

The title of Five Countries apparently refers to the three musicians' countries of birth, migration and residence. The album takes its inspiration from a much wider geographical range, with music from Europe, Africa and North America all making their presence felt.

Yates studied jazz at the Guildhall School of Music, has contributed to recordings by pop acts such as Robbie Williams, and has an extensive background in folk music. He's worked with leading lights of the British and Irish scene including Kate Rusby, Karen Tweed and Michael McGoldrick—the composer of "Waterman's"—and was a member of the splendidly named folk/reggae band Edward II and the Red Hot Polkas. Yates' folk heritage comes over strongly on this set, both in the mellow and breathy sound of his horn playing and in his spacious, ever so slightly mysterious compositions.

Byrne's bodhran playing adds another strong strand of folk to the album, while his use of other percussive instruments adds depth and color. Bende's subtle and emotive acoustic guitar work has a bright edge that contrasts beautifully with Yates' softer horn sound, coming to the fore on "Frozen Forest"—where Bende's light and deft approach is truly melancholy—and on his own lilting ballad, "Freedoms Lost."

Five Countries readily evokes images of open spaces, coastlines and harbors, and hills and mountains. With none of the tension or urgency of urban life, this is music that conjures visions of a peaceful and bucolic rural idyll.