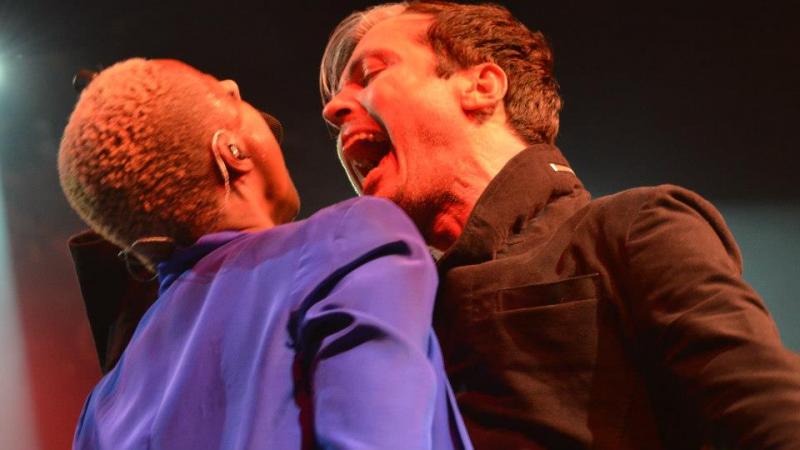 By MIKE PERCIACCANTE
October 13, 2012
Sign in to view read count
Fitz & The Tantrums
The Paramount
Huntington, New York
September 21, 2012
Fitz & The Tantrums possess one of the most inventive names ever conceived, but the band has much more than just a great moniker. Its music is a true hybrid---a modern soul/funk, with a heavy dose of indie rock and old-school new wave. The neo-soul band led by singer Michael Fitzpatrick (Fitz) and co-vocalist Noelle Scaggs (who adds the powerful earthy soul to Fitz' croons) features four talented musicians who supply the tight, funky Motown-inspired keyboard/organ and sax-led backbeat: Jeremy Ruzumna on keyboards, James King on saxophone and flute, bassist Joseph Karnes and drummer John Wicks.
Fitz & The Tantrums attracted a diverse and interesting crowd to Huntington, NY's, Paramount. The members audience ranged in age from their early twenties to late fifties, the manner of dress from relaxed to high fashion. It was quite a spectacle. Many of the guys and girls wore jeans and sneakers, but a large number of the girls wore party dresses or tight pants and heels. The guys who got a little more dressed up wore business casual—some even wore sports jackets. Finally the lights dimmed and the band appeared. With the stage bathed in a blue light, Fitz and his cohorts initiated the evening's festivities with a killer version "Don't Gotta Work it Out," one of the lynchpin tracks from both the band's debut EP Songs for a Break Up, Vol. 1 (Dangerbird Records, 2009) as well as its debut full-length CD Pickin' Up The Pieces (Dangerbird Records, 2010).
Calling the band's performance high-energy is akin to calling the American Civil War a short-lived and minor skirmish. Fitz and the band members continually interacted with the audience, Fitz and Scaggs repeatedly expressed to the crowd that they were excited and thrilled to be playing for them. The duo, whose theatrical chemistry was sizzling as they danced and flirted, bumping and grinding throughout the performance and all the while trading call and response vocals.

The classic soul-meets-Motown-meets-relentless funk/pop party continued on "Winds of Change," but the party was just getting started. Fitz, Scaggs and the band had the crowd dancing, clapping and screaming with abandon as it roared through "Pickin' Up The Pieces," "Wake Up"—a new song—plus "Breakin' The Chains Of Love" with its rolling rhythm, and the '60s-influenced Memphis soul of "Rich Girls" with its fast rhyming scheme, while the stage lighting continually shifted from purple to bright maroon, to azure, to magenta, to deep blue, to blue green.

Fitz took a moment to admonish an audience member who appeared to be a bit bored, before announcing that the next song would be on the band's next CD—"Outta My League"—which featured Scaggs dancing, wailing, gyrating and frenzied tambourine-shaking. This was followed by a tour de force rendition of the Raconteurs' "Steady as She Goes." From the first notes, as the recognition spread through the crowd the audience members were singing along, raising both of their arms in a salute that looked very much like the signal for a touchdown, hooting and hollering at the top of their lungs.

Fitz often stepped out to center stage to have conversations with members of the audience, and at the same time would also address the crowd as a whole. On one such occasion he said, "This is not a sitting venue. C'mon, stand up! This is where the dance party will begin!" The organ-drenched version of "L.O.V." had the desired effect, as everybody on the floor and many of those with assigned seats in the mezzanine—old, young, guys and girls—was, at the very least, up and swaying to the music.

The concert's main set ended with the pleading "Dear Mr. President," and a moving version of the tempo- and language-shifting (the spoken passages are in French) "News 4 U."

Returning for a two-song encore, the band's cover of Eurythmics' "Sweet Dreams (Are Made Of This)" was heavily syncopated and soulful, while still managing to retain much of the original's allure and power. Closing with a version of "MoneyGrabber" and with the song coming to an end, just before the last chorus, Fitz ordered the band to stop playing. He somehow convinced the crowd to get low and kneel on the floor (either as a baseball catcher would, or on one's knees) before he and the band would continue. He even called out the most stubborn of those on the dance floor, making everyone get low and down on the floor. Once he was sure that the entire audience had "assumed the position," the band drove back hard into the chorus. And as it kicked-in, Fitz, Scaggs and the entire audience literally jumped for joy, as he thanked the crowd for helping "spread the word about this band" and for "making our dreams come true."

The sweat-drenched audience members were still buzzing about the amazing show they had just witnessed as they filed their way out of the venue and onto the street toward their cars.