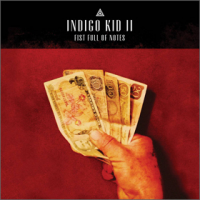 For this second album, Messore is joined once again by bassist Tim Harries. The experienced Iain Ballamy is now a guest player, his place as a full-time band member taken by tenor player Trish Clowes. Martin France, Ballamy's band mate in Loose Tubes, is on drums. The resulting quartet is a mix of youth and experience—and the mix works well.

Ballamy is a hard act to follow, but Clowes takes on the tenor sax responsibilities with impressive confidence on Messore's original compositions. "All Hands To Dance And Skylark" finds her at her lightest and most upbeat—a key player on the album's brightest and best tune.

France's hard-hitting percussive flurries often dominate proceedings—he's the lead player on "Mr Randall," supported by Harries and Messore. His playing is always fascinating, but occasionally it's a little too much to the fore—the title of "Quiet Waters" would have been more accurate if France had laid back a bit. Harries plays a more supportive role—with rare exceptions such as his fluid, melodic, electric bass lines on "The Bay."

"Snow On The Presellis" has a gentle, folk-ish, feel—Clowes' playing is delicately nuanced, as it is on the more sophisticated sound of "Waiting For Paula." Messore gives "From Nowhere To Our Place" the feel of the Beatles' early forays into Eastern music: "Carpet Boys" is an extended piece with a sense of drama, heightened by the leader's guitar solo and by the guitar/tenor dialogue.

Ballamy appears on "The Healing Process," a mellow ballad where his tenor takes center-stage, and "Sketches In The Fabric"—predominantly a more aggressive number where tenor, guitar and drums vie for the position of Top Dog (France wins on points).

The pleasures of the first Indigo Kid album took their time to appear. Fist Full Of Notes has a fuller sound—thanks in the main to Messore's increased use of effects—lacking the spaciousness of tunes like "Pages To A Friend" but with a more immediate impact. Indigo Kid II has moved on from Indigo Kid—the evolution of the third generation (which, according to rumour, has already recorded) is a fascinating prospect.

Snow On The Presellis; Waiting For Paula; Carpet Boys; All Hands To Dance And Skylark; From Nowhere To Our Place; The Healing Process; Mr Randall; Quiet Waters; The Bay; Sketches In The Fabric.