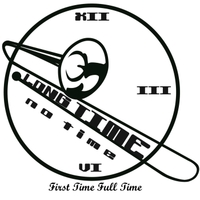 The Canadian band Long Time No Time must have a fondness for wordplay. The title of their new album, First Time Full Time, is quite clever, already revealing that this five-piece band wants to have fun. It is also a group with a passion for combining the energy of rock with the intricacy of jazz. That's not an easy accomplishment, as many artists lean towards one or the other instead of getting the balance right. Long Time No Time certainly does get it right but also ventures beyond a simple jazz/rock hybrid, flirting with hip-hop and klezmer music. An explosion of creativity jam packs First Time Full Time with a whopping 20 songs—a pretty amazing thing in this day and age. Not many bands go to such great lengths in delivering such an insane amount of music to their audience. This would have been a double album in the '70s.

The album has a diverse approach. Songs such as "Hangry Bois" as well as "I Don't Wanna Go to School" stand out for their unique tone and vibe. One of the most distinctive features of this release is that the arrangements are sophisticated yet catchy and palatable. In particular, the horns play an integral part and are absolutely spot-on, adding a thick fabric of melodies and beautiful overtones while driving the infectious hooks. The grooves on First Time Full Time embody the best combination of jazz and rock, combining the vibrancy of the former and the uncompromising energy of the latter.

About Long Time No Time