By HRAYR ATTARIAN
October 21, 2015
Sign in to view read count 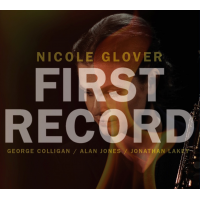 Tenor saxophonist Nicole Glover has made a bold statement with her First Record. The deceptively generic title belies the stimulating music comprising this thematically cohesive album. Glover's own compositions as well as her interpretations of others' work is rooted in the august tradition of her instrument in jazz and, much like that of her idols, it has a uniquely mordant adventurous edge.

The dramatic "Snow Dance" demonstrates Glover's "inside-outside" playing and writing. Pianist George Colligan, here on trumpet, trades long, expectant lines with Glover as they state the classically influenced head. Drummer Alan Jones restlessly rumbles in the backdrop while bassist Jonathan Lakey enhances the tense mood with darkly hued, arcane reverberations. Glover and Colligan engage each other in an intelligent and contemplative dialogue that delightfully flirts with dissonance. Yet bluesy hints, wails and quiet screams also pepper their expressive duet as their horns flitter around each other with exuberance.

Glover's captivating sound is the product of a superb mélange of rough-hewn intensity intricately crafted meandering melodies and reserved but definite ardor. Glover issues a flood of raw notes as she improvises with gusto and fervent abandon on her uniquely fascinating arrangement of Maurice Ravel's "String Quartet In F." Colligan runs the range of his keyboard with breathtaking agility and sweeping arpeggios. His percussive chords egg on Jones' galloping, energetic beats.

The brilliant and passionate "Conscience of the King" has a crisp, crystalline structure upon which the individual musicians layer their extemporizations. Colligan weaves a spontaneous harmonic tapestry with his angular phraseology. His captivating soliloquy is much like modern poetry in its free flowing tunefulness. Lakey takes center stage with a pensive and superbly lyrical solo that shimmers with incandescence. Glover blows a breathy, cool tenor with a mystical sense, and refreshingly original motifs.

First Record is more than an impressive debut. It is a genuinely notable record regardless of its creator's experience. This early in her career Glover already has come a long way in forging her own unique voice. It is thrilling to think what would happen if she maintains this creative momentum after her individuality has fully formed and matured.