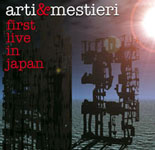 While the emergence of Punk and New Wave rang the death knell for most progressive rock acts that came to prominence in the 1970s, the ability to create global communities via the internet has led to a surprising resurgence of interest. Italian prog/fusion group Arti E Mestieri garnered considerable acclaim for its first two records—Tilt (Cramps, 1974) and Giro Di Valzer Per Domani (Barclay, 1975)—and then struggled against popular opinion through the 1980s before disbanding in 1988.

Reformed in 1998 with founding drummer Furio Chirico, keyboardist Beppe Crovella and guitarist Gigi Venegoni, this largely instrumental outfit began to record and tour again, releasing four full-length CDs and one EP. Recorded in 2005, First Live in Japan is Arti E Mestieri's first album to receive significant North American distribution, and its energetic delivery of both retrospective and recent material makes it an excellent entry point for newcomers and a boon for existing fans.

The 2005 version of Arti E Mestieri finds Venegoni replaced by Marco Roagna and, for the first time since Giro Di Valzer Per Domani, the group is a septet again with violin and woodwinds. Opening with the entire first side of Tilt, the group's power is immediately evident. "Gravita 9, 81," with Lautaro Acosta's violin and Roagna's overdriven guitar pushing the theme over a frenetic 5/4 rhythm from Chirico and bassist Roberto Cassetta, suggests an intriguing cross-pollination of vintage Mahavishnu Orchestra, contrapuntal Gentle Giant and symphonic King Crimson, with Crovella's mellotron a dominant voice.

But Arti E Mestieri is equally informed by the music of its own culture, with pastoral hints of the Italian countryside and Mediterranean breezes imbuing the music as well. "Kawasaki" features Crovella, who demonstrates a Keith Emerson-like classical pianism but without the navel-gazing self-indulgence. It's that overall lack of bombast, in fact, that makes Arti E Mestieri so appealing. All the texture, stylistic breadth, virtuosity and complexity of progressive rock is there, but equally the group can deliver a simple folk tune like "Glory," one of Iano Nicolo's few vocal tracks.

A suite of six tunes from Giro Di Valzer Per Domani ranges from the lilting waltz of "Valzer Per Domani" to the raucous "Mirafiori," featuring frenzied solos from Roagna and Acosta. While all the players are notable, Chirico and Crovella stand out. Chirico's a vibrant powerhouse who nevertheless knows when to pull back, while Crovella is a master of texture, melody and invention throughout.

Despite revisiting old material, what makes First Live in Japan so strong is that the music doesn't feel retro at all. The more complex, idiosyncratic and episodic "2000" may signal where the group is heading, but the suites from its first two classic albums sound no less contemporary. Some bands reform to cash in on a revival of interest, but the vibrant Arti E Mestieri is clearly back to do more than merely regurgitate past successes.