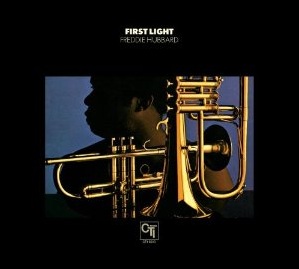 It's fitting that the third wave of Sony Masterworks' CTI reissue campaign includes Freddie Hubbard's First Light, which was the third and final album in Hubbard's holy trinity on CTI. While the trumpet titan continued to record for Creed Taylor's imprint after this session, the work that followed First Light never fully measured up to his earlier successes for the label.

Red Clay (CTI, 1970) was a bristling session with fulsome fusion meeting head-on with heady hard bop, and Straight Life (CTI, 1970) shifted towards a soul-meets-funk sound, with stellar results. First Light followed its predecessor down the path of funk and soul, but Hubbard broadened his approach and outlook by bringing in CTI-regular Don Sebesky to provide arrangements that presented the horn-toting Hubbard in a different light.

While Sebesky's arrangements on other CTI dates were occasionally over the top and grandiose, his light-as-air blend of flute, harp, vibraphone and strings provide the perfect counterpoint to the funky bottom from bassist Ron Carter and drummer Jack DeJohnette. Hubbard reins in his more aggressive tendencies for the most part, making First Light one of the finest demonstrations of his lyrical lines and lovely tones. The title track is only half-focused on Hubbard, with the continual tussle between flute and drums, along with a fine George Benson guitar solo, drawing some well-deserved attention when the trumpeter bows out. Paul McCartney and Linda McCartney's "Uncle Albert/Admiral Halsey" is book-ended by some beautiful horn work from Hubbard, but that's only part of the story. An accelerando leads to more muscular music, and Benson shies away from any Wes Montgomery mimicry that he enjoyed on other outings, instead favoring a full-on funk excursion.

Hubbard's most tasteful and soothing performance comes in the form of a Henry Mancini and Johnny Mercer collaboration ("Moment To Moment"), while Sebesky's compositional contribution ("Yesterday's Dreams") is another example of why Carter is often considered the arbiter of rhythmic taste. Leonard Bernstein's "Wonderful Town" rounded out the original album, but two noteworthy bonus tracks that were introduced on earlier reissues are still tacked on. Cedar Walton's "Fantasy In D," from Polar AC (CTI, 1975), is a perfect fit, and a live version of "First Light," which features Carter, DeJohnette and guitarist Eric Gale, is a fine contrast to the studio take, as it features more fireworks from the late, great Freddie Hubbard.