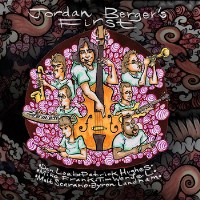 Jordan Berger is a young bassist who, on this debut album as a leader, manifests a mature conception of the post-bop jazz idiom with his assembled group of mostly Philadelphia-based musicians, collectively producing a sophisticated, intelligent, and lively groove. The tracks are mostly originals which, by virtue of their resonances with the jazz legacy, sound delightfully familiar and provide an excellent foil for rich improvisations and collective musical conversation.

First opens with Berger's own "Qualm," featuring his extended soloing on upright bass that shows a master in the making. "Congregation," as the name implies, features the whole ensemble in a laidback, lightly swing tempo, with Daniel J. Loeb's tenor sax and Tim Wendel's guitar solos shining brightly. Thelonious Monk's "Played Twice" has rhythmic twists and turns that might have surprised even Monk, while the title track offers frenetic, dissonant variations on a blues theme. Wayne Shorter's "Infant Eyes" is a beautiful ballad, sung in a sultry manner by vocalist Chrissie Loftus, who also composed the lyrics. Drummer Byron Landham makes a guest appearance here, supplying his painterly rhythmic backup. "Second" and "A Letter to Robert Hunter" continue the instrumental conversation, and "Primonk" comes close to an R&B pun on Monk's syncopations, with Berger's funky bass guitar riffs and Matt Scarano's insistent drumming providing a heavy lilt. "Self-Inflicted" has a lazy, reflective "Paris Blues" feeling, contrasting sharply with the slow buildup of neurotic tensions in "Third," which closes the set.

Jazz musicians today have a struggle to go beyond what has already been produced, and many of them unfortunately try to get attention by extending clichés or through almost too clever inventiveness. This album stands out by virtue of its straightforward ensemble playing which, at the same time, stretches musical concepts beyond expectations. Its simplicity enables paradoxical complexities that play upon the polarities and musical questions which make for great improvisations.

In addition to their jazz interests, Berger and Loftus are also a members of a rock group, iNFiNiEN, exploring new territories of sound by using exotic scales, chords, and rhythms. Some of the ideas for First may have been generated in a rock context, but the album retains its straight-ahead jazz feeling throughout, and the players are all part of the contemporary jazz milieu of Philadelphia. If he maintains his jazz passions, Berger may well emerge as one of the best of his generation.