Joy On Fire: Fire With Fire

By GARETH THOMPSON
February 16, 2018
Sign in to view read count 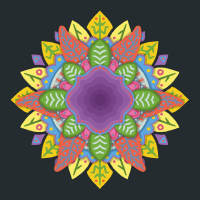 Halloween night in 2017 saw jazz-rock legends King Crimson playing Newark, New Jersey. Among the crowd that evening were members of a local band known as Joy On Fire, paying homage to one of their major inspirations.

The name might sound gospel-inspired, but Joy On Fire draws from the eye-popping thrills of punk and the work ethics of prog to bolster their jazz auras. Their debut album, The Complete Book Of Bonsai, had a heated urgency that reminded you of Morphine, the Boston-based indie trio who led with sax rather than guitar. This second record is another highly flammable work that again quickens your pulse.

It also shows the tightness gained from hundreds of live shows. Impressively the band has kept a list of all these gigs since they formed in 2009, including two at the splendidly named Scuppernong Bookshop in Greensboro, NC. The threesome's sax star, Anna Meadors, once hated the thought of doing anything but live recordings. Fire With Fire does keep a sense of raw recital, but overdubs and extras make this a more polished outing.

Not that the delivery is any less impassioned. John Paul Carillo's electric bass gives you a good drubbing as if it were sampling a minor earthquake. Christopher Olsen offers a whirlwind of percussive effects with his cymbals bathing us in a gong-like glow. Then there's the redoubtable Meadors herself, who assumes a kind of Mel Collins role to continue the King Crimson link. Blowing a riotous carnival on "Le Phant" one moment, she veers into guitarish hammer-on and pull-off licks that could be from Robert Fripp's handbook. It's little surprise she namechecks the lungbusting Colin Stetson as an influence.

Third number up is "The Spider's House," where a slinky intro falls onto Eastern motifs that smoulder like incense and entice like jasmine. Whatever spider lives in this house it surely owns a hookah. Among it all are riffs so sweetly simple that any child could whistle them. The piece closes with a once studio-shy Meadors going into multi-track meltdown.

Glock and vibes on "Hey Hey" chime like ice cubes in tequila, whilst the tenor sax is all brooding beer chaser. "World Systems" follows this pattern, then "Double Dub" rumbles with rocky bass and erupts into psych echoes of some freaky '60s club. The ominous "Outro" warbles with weird sorcery and invites us into a trance dance. It also closes out this volatile album before we melt further under its flame.

Fire With Fire is a thrill of high voltage jazz 'n' roll. Go get your fingers burned.