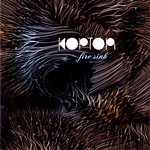 Time and space have shaped the life of Kevin Brow. The Canadian-born drummer moved to Toronto when he was 19, and went on to play with some of the best jazz musicians including Mike Murley, Pat La Barbera and David Braid. Six years later he moved to Copenhagen. This was significant in more ways than one: he was trading the environment of mainstream jazz for a freer atmosphere.

Copenhagen provided an opportunity for Brow to form his own groups and also to play with other bands. His bands proved to be fertile ground into which he sowed the imagination of his musical vision. And when his first CD with Koptor (Fresh Sound New Talent, 2008) was released, it was met with widespread acclaim. Brow had set his mark.

Koptor represents Toronto, Copenhagen and New York, the three cities that contributed significantly to his musical development and shaped his musical approach. But as much as they did in those terms, the germ of invention lay within Brow, a trait that manifests itself all over again on Fire Sink; though the name of the band remains the same, the lineup is different from the first edition.

Brow has a limber approach to composition, letting the melody take wing on the imagination of his musicians, who are articulate enough to forge new contours without trespassing on the boundaries of good sense.

"Riverspeak" has a classical refrain that is given its emotional soul by Lotte Anker. She plays the soprano saxophone here, a messenger who carries the magic of the composition over the spaced notes of pianist Jacob Anderskov and the marching beat set up by Brow. His vision goes against the grain, but it fits in and locks the rhythm in before he opens up with a scintillation of the cymbals essayed against the free convolutions of Anker now on the alto sax. Form, cast in a new mold, is spellbinding.

Lively interaction between Brow and Anderskov sets up "Fire Sink" but from then on time and space ebb and flow. Anker soaks in the melody shaping its body with fertile ideas that spring as much from fierce wraparound phrases as it does from gentle extensions. Brow illuminates the rhythm from a rich sonic palette adding a succinct edge to the dynamics.

Brow has chosen a fine band of musicians that harken to his music with empathy and insight. They elevate it with explorations that are sweetly pursued or erupt in electrifying cry. Together they make the music highly seductive.