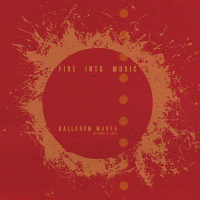 The fascinating thing about this album is that trombonist Steve Swell, ostensibly the leader of the Fire Into Music Quartet with saxophonist Jemeel Moondoc, bassist William Parker and drummer Hamid Drake, didn't know this record (an LP) was being made until he received a copy. Business issues subsequently were worked out and the release is official but the backwards methodology might actually have worked in the group's favor.

Knowing a record is being recorded for release, particularly in the realm of the avant-garde, may and has resulted in some stilted albums, sadly unrepresentative of a group's ability. Not so here. There is no trace of self-consciousness or music that sounds like it was produced ultimately to be sold. Instead, the two side-length tunes (one each by Moondoc and Swell) are warm and inviting, lovingly capturing a live moment with an effectiveness not often found.

And since Swell and company were just playing (at Ballroom Marfa in Texas in October of 2004), the record is organic rather than being highly stylized or egocentric. Despite the progressive pedigree of the four musicians, they also happen to be thankfully some of the more rhythmic, melodically inclined folks of that scene so rather than the expected squawkfest, the listener is regaled with percolating post bop, propelled by the gooey rhythm section of Parker and Drake. A delicious, if somewhat roundabout surprise.