Club d'Elf: Fire in the Brain Live at Berklee 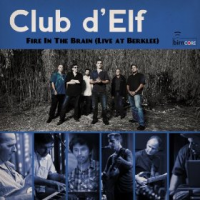 "To thine own self be true" is a reliable expression, and few band biographies are more true to their subject than the official label writeup on the marvelously twisted Club d'Elf: "Circling about bassist/composer Mike Rivard (Morphine, Either/Orchestra, Guster, Boston Pops), D'Elf is a constellation of top musicians from the jazz, DJ, rock and world music scenes of Boston and NYC who get in the groove and proceed to blow it up."

Fire in the Brain presents a fevered d'Elf performance recorded in July 2012 Live at Berklee in their Boston hometown. Rivard is joined by longstanding partners in making "d'Elf music": Dean Johnston on acoustic and electric drums, DJ/turntablist Mister Rourke, Allain Mallet on keyboards and a melodica that sings both sweet and spooky, and guitarists Randy Roos and David Tronzo.

Rivard and Johnston are Berklee alumni, and Mallet, Roos and Tronzo serve on the Berklee faculty. More than 90 minutes, Fire in the Brain captures the long and wild ride of their joyous homecoming. You don't have to venture much further than its two-part leadoff title track: "Part 1" opens with a disembodied, swirling voice introducing "what I call the elf music"—a great example of how turntablist/DJ Rourke uses the human voice to introduce not only narrative direction but different colors into the band's sonic palette—and ends with guitar screams which sound like a monster that escaped from King Crimson's epic Starless & Bible Black (Editions EG, 1974). Mallet quickly commandeers "Part 2" with an electric solo that nods and winks to Sun Ra, John Medeski and Horace Silver, and seems to simultaneously channel Brian Auger and Herbie Hancock in the subsequent "Black Heart Rebels."

Rivard swaps his bass for a sintir, the three-stringed Moroccan bass lute that's traditionally used by a mystical Sufi brotherhood of trance healers, for the final two tunes. He introduces a Moroccan vibe while Johnston's drums reflect shades of hip-hop and dub into "Peace One," composed by guitarist John McLaughlin for his landmark My Goal's Beyond (Douglas/Columbia, 1971). Atop the fading tumult of the finale—the Moroccan traditional "Zeed Al Maal"—Rourke drops in the line, "The experience of the dissolution of boundary and form..." to close this quite remarkable set.

I received a gift copy of Stanley Kramer's 1963 monumental It's a Mad Mad Mad Mad World ("the comedy that would end all comedies," Kramer once vowed) this past Christmas. Listening to Fire in the Brain is much like watching that ensemble comedy classic: After you become familiar with the threads that run through things—the movie's plot and the music's development—you can pretty much jump in anywhere and know that you're not far from somebody in the ensemble stepping forward to deliver an inspired performance.