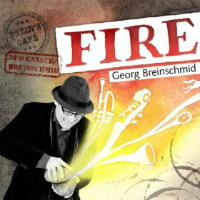 The North American cognoscenti are not so hip after all. Not many will have heard of the Vienna Art Orchestra and fewer still will know of its one-time bassist, the classically trained, Georg Breinschmid. Breinschmid is a maddeningly ingenious virtuoso musician, who, picking up where Frank Zappa and Victor Borga left off, is breaking down musical barriers faster than they can be put up and bringing more pure joy to the unexpurgated enjoyment of serious music than many musicians on the planet today.

There is ample evidence of this on his extraordinary Fire, shared with three other musicians bristling with talent. With Slovak/Hungarian Romani boy wonders, violinist Roman Janoska and his brother, pianist Frantisek Janoska, he forms a trio called Brein's Café. With an equally madly talented trumpeter and vocalist, Thomas Gansch, he forms Duo Gansch/Breinschmid. These two small but potent ensembles share the musical credits on Fire. Both indulge in jaw-dropping pyrotechnics and even more exalted musicality.

ADVERTISEMENT
Like the great Victor Borga, Breinschmid's music is brimful with equal measures of serious, jaw-dropping virtuosity and humor. When he is happy, his bass bubbles over with ostinato chatter that provokes his colleagues into soaring flights of contrapuntal imagination. The bassist will then resort to unexpected harmolodic flights of fancy that mesmerize with unusual changes daubed with colorful root notes that enliven even the most mundane chords. Melodically, Breinschmid is an agent-provocateur, who stirs up the melody, giving his accompanists no choice but to discover shocking new inroads to musical excitation. He is lightning fast in his thinking and, like some Saxon god, occasionally throws musical thunderbolts at his melodists. For their part, the Janoska brothers and Thomas Gansch respond with speed, unfettered creativity and enviable imagination.

There is much here to cheer about. From the roistering "Rodeo" and the energetic "Little Samba" to the comedic narrative "Herbert Schnitzler," the music is bristling with energy and invention. For the Romani brothers there is the wild musical sojourn, "Nóta/Csárdás," which gives audiences a peek into the ancient and warm folk music that so entranced Béla Bartók, genius composer of the late 20th Century.

On Fire's bonus, Breinschmid showcases longer versions of some songs that could not find a home elsewhere on the album, and shares some of the fun and enjoyment had in making the album. This is the second opportunity for serious fans of superlative music to appreciate an artist with raw genius for the drama of music and a love for musical theater, an artist who combines both with seamless beauty.