By DOUGLAS PAYNE
March 1, 1997
Sign in to view read count 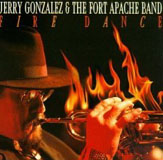 Seems Jerry Gonzalez can do no wrong. His Fort Apache band has recorded sporadically since 1979, yet has maintained a remarkable unity that continues to strengthen with each recording. Fire Dance is a gem of a performance, caught live at DC's famed (and overpriced) Blues Alley (February 2-6, 1996) and most beautifully recorded by ace producer Todd Barkan. A former percussionist with Dizzy Gillespie and McCoy Tyner back in the 70s, Gonzalez is also an excellent trumpet/flugelhorn player who's dynamic rhythmic approach mixes a little of the energy and wit of Diz with the modal intuition of Miles.

What makes the Fort Apache band such a success is the enormous talents of its principals: Larry Willis (piano), John Stubblefield (tenor saxophone); Joe Ford (alto and soprano sax); brother Andy Gonzalez (drums) and the multifaceted Steve Berrios (percussion). They have discovered something together that is a joy to hear. It is not so much a matter of imposing Latin clichés on modal models as it is a telepathic and sensitive collective exploration of the challenging possibilities such a fusion invites.

Willis's "Isabel, The Liberator" sets the fiery mood, eliciting thoughtful solos from Gonzalez and Stubblefield. The haunting "Elegua" and elegiac "Verdad Amarga" remind one of the sort of swamp jazz Willis made back in the mid 1960s with Hugh Masekela (who's not nearly the horn player Gonzlez is).

The centerpiece, though, is the nearly 20-minute Latin-modal reworking of Monk's "Let's Call This." Gonzalez dedicated a whole album to rethinking the brilliant corners of Monk's music a few years back ( Rhumba Para Monk )—and he and his team know how to make these intricate little tunes swing like hell. One other Monk tune ("Ugly Beauty" ) and another Latin swinger, "Today's Nights" round out the set.

Even at slightly over 70 minutes, there's just not enough of the Fort Apache band here. This is excellent music—and one of the very best jazz albums released in the last year.