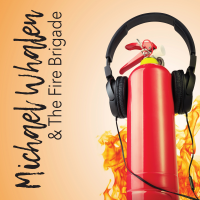 Michael Whalen is a versatile, accomplished keyboardist whose professional focus has been film and especially television soundtracks that earned him a pair of Emmy Awards and includes the Good Morning America theme. Promotional material describes this project as the long-contemplated culmination of his desire to create a jazz-fusion album along the lines of early influences like Herbie Hancock or Chick Corea. Strong cinematic imagery is evoked in many songs. It's easy to imagine certain numbers in theme music scenarios, some more vividly than others, while some are much stronger as simply songs.

"Code 10—80" goes from an introductory Emerson, Lake and Palmer type opening to a theme that could fit the opening credits for an adventure flick. The upbeat, salsa-synth opening for "Gringo Suave" is enough to make a listener jump aboard for the ride. "Go Go Bird" and "Benny's Brooklyn Blues" add some funk, with sweet sax by Bob Magnuson, who's work on various wind instruments is a very strong plus throughout the album.

"Song at Midnight" is a moving, piano-based change of pace that sounds markedly different from the other tunes and thus stands out. It isn't the record's strongest selection, but it is an excellent counterpoint. Rapid fire pieces like "Flabbergasted" and "Slippery Slope" show the range of Whalen's skills on the keys. He's also credited with songwriting and production. There's a lot of merit here in each of those categories.

"Blues for You," the extended finale, is another obvious candidate for film inclusion and inspires multiple imaginary images. That's a wrap baby, and a pretty damn good one.

There is no denying that the players assembled are some of the best musicians available, including a uniquely paired, all-star rhythm section with drummer Vinnie Colaiuta and bassist Michael League of Snarky Puppy appearing on five tasty tracks. It would be interesting to learn which, if any, of these cuts were developed or used as actual theme music. The production qualities and musicianship are first rate, and while some tunes are a bit too repetitive, most of the grooves are solid. This is an excellent party album. Don't be surprised if some wild scenes emerge.

From a perspective visual or film background, music can clearly make or break a scene. Every piece of music or film ever made in either genre could be combined with varied results though the vast majority of pieces are crafted to work on their own. Since this is a musical presentation, merits or faults must be considered from that point alone. Whether a listener would guess Whalen's background is an intriguing question, but the answer should be inconsequential. What counts most here is how the music stands alone. For the most part it does, and very well.