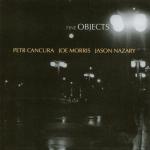 Guitarist Joe Morris continues his 2002 experimentation with the double-bass. On Fine Objects, he leads a trio of saxophone, bass, and drums through two of his own compositions, a couple of trio improvisations, and other compositions by Ornette Coleman, Eric Dolphy, Larry Clinton and Petr Cancura.

Morris chose two former students from the New England Conservatory in Boston for this session. Tenor saxophonist Cancura, born in the Czech Republic, is gaining quite the reputation in jazz circles. He has been a sideman to Bob Moses and Danilo Pérez, but it was his session with Morris and Luther Gray on Wildlife (AUM Fidelity, 2009) that catapulted him into the big time. Drummer Jason Nazary has played in various rock indie bands and with Darius Jones and Shayna Dulberger.

Like Morris' Bass Quartet recording High Definition (Hatology, 2009), he doesn't eschew swing in favor of the modern. The effect, mostly due to Cancura's horn, is a throwback to the 1960s, or even the '50s, perhaps. Although a young man, his sound is that of an old soul. With Morris laying down a powerful repetitive groove on "Rwanda," Cancura flitters off notes, chewing on upper register and breathy sounds that are equal parts Lester Young and Pharoah Sanders. Even when he takes on a ballad like "My Reverie," he maintains that ruminative quality of the old masters.

On his own "Big Foot," Cancura switches to soprano. The sometimes impenetrable straight horn yields to his approach with ease. Morris and Nazary's laidback sense and relaxed swing showcase the saxophonist. When Morris picks up his bow on "Folk," Cancura goes on to blow flute-like notes through his open ended clarinet, while Nazary works his cymbals. The piece features Morris, extending wave upon wave of energy, on this, his "second" instrument.

Joe Morris in his new role as bassist/leader is a revelation; the same can be said of the young Petr Cancura.