By C. MICHAEL BAILEY
May 17, 2012
Sign in to view read count
Summit Records hits a quiet home run with the release of Three Voices' Transitions and Deborah Shulman & Larry Zalkind's Lost in the Stars: The Music of Bernstein, Weill & Sondheim. 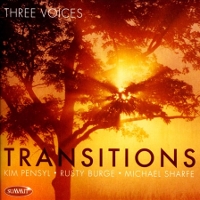 Three Voices is the trio of flugelhornist Kim Pensyl, vibraphonist Rusty Burge and bassist Rusty Burge. While a vibraphone-anchored trio is not unheard of, it is a welcome and even novel change from piano- and guitar-centered small ensembles. The vibes lend a light touch to the harmonics of performance, providing an ethereal ambiance to the music. The flugelhorn (as opposed to the trumpet) magnifies these characteristics. Time keeping is the responsibility primarily of the bassist, but all of the principles can influence it.

Transitions is a collection of standards with three original free-form "Transitions" interspersed. These standards are all ballads, a form that lends itself to this particular format very well. These ballads and "transitions" meld well into a Tin Pan Alley tone poem, a unified and thematic work greater than the sum of its parts. The opening triptych of "Summer Night," "Dream Dancing" and "If I Should Lose You" establishes an airy progression of love songs rendered like a warm fire, perfumed with oak and hickory. The remainder of the recording follows suit, Kim Pensyl and company achieving a fine offering carefully played. 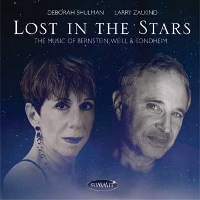 Lost in the Stars: The Music of Bernstein, Weill & Sonheim

Time out! This is not a jazz vocals disc. What it is is a most superior show-tunes recital, specifically focusing on Leonard Bernstein, Stephen Sondheim and Kurt Weill. At first blush, it would appear that this is an unfortunate mixing of musical theater generations, marring an otherwise well-conceived theme. But first blush would be too simple and wrong. Weill to Bernstein to Sondheim is logical evolution of the most sophisticated writing for the stage, something quite apart from Tin Pan Alley, something much more grown up.

Lost in the Stars: The Music of Bernstein, Weill & Sondheim continues the delicate art of songcraft heard in Transitions, expanding it to the vocal realm. Vocalist Deborah Shulman and brother-in-law and trombonist Larry Zalkind give an almost classical reading of the Bernstein-Sondheim-Weill songbooks. The opening Bernstein pieces are perfectly punctuated by Zalkind's classically-trained trombone. He provides a brass backbone to these carefree pieces as Shulman sings them with sensitivity and insight. The "Mack the Knife" here is no Bobby Darin, it is almost Late Romantic, like Richard Strauss having drinks with Weill and the two playing truth or dare at the piano. Most sophisticated are the Sondheim pieces. "Children Will Listen" is an adult lullaby warning for adults and "Losing My Mind" is the result of not heeding that warning. "Leave You" may be the greatest breakup song most people have never heard.

It must be noted that this disc is produced by Ted Howe, a West Coast musical mainstay and close friend of the principles. His considerable arranging talents were responsible for a novel "Mack" and his horn arrangements for Zalkind make "Lucky to be Me" and "It's Love" sparkle. The title piece, Weill's "Lost in the Stars" from Cry, The Beloved Country (1948), went on to become a favorite of pianist Bill Evans. It is no wonder as melodically rich as the song is, Evans would have had to have close empathy with it, lyrically and harmonically. Shulman lays waste to the emotional landscape of the song as Howe further deepens the piece with his careful direction of Zalkind. In the end, what this is, is songcraft of the highest order.

Tracks: Summer Night; Dream Dancing; If I Should Lose You; Transition #1; All the Things You Are; Fotografia; RKM; Very Early; Transition #2; Isfahan; I Hear a Rhapsody; Transition #3; Stella by Starlight; It Never Entered My Mind.

Lost in the Stars: The Music of Bernstein, Weill & Sonheim

Tracks: Something's Coming; Lucky to be Me; Mack the Knife; The Ladies Who Lunch; Children Will Listen; It's Love; I Feel Pretty; Losing My Mind; September Song; Ain't Got No Tears Left; My Ship; Leave You; Lost in the Stars; No One Person is Alone/Not While I,' Around..