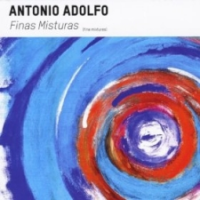 Brazilian pianist/composer Antonio Adolfo has been making important contributions to the Brazilian-Caribbean musical discography for 40-plus years. His most recent recordings—Chora Baiao (Self Produced, 2011), with Adolfo as leader, and La e Ca (AAM Music, 2010), made with daughter, vocalist Carol Saboya—display the results of a careful evolution of jazz through Caribbean and South American music, from trumpeters Kenny Dorham And Dizzy Gillespie's "Afro-Cubano" revolution of the mid- '50s and the bossa nova of the 1960s.

On Finas Misturas (Fine Mixtures), Adolfo wanted to mix his compositions in with some notable jazz standards and apply his exceptional arranging and performance method to the mix. His result is a collection of ten pieces—six original compositions and five jazz standards—that meld together, forming a Brazilian Suite that is elegantly humid with the gentle swing of a warm wind.

Adolfo, with no small amount of cunning, applies his recipe to John Coltrane's cranky and demanding "Giant Steps," with Claudio Spiewak's acoustic guitar softening all of the hard edges and cushioning Marcelo Martins's almost anti-Coltrane tenor saxophone. The pianist does the same with Coltrane's "Naima," his feathery playing lightening the compositional gravity of both pieces. Dizzy Gillespie's "Con Alma" fits most perfectly in to Adolfo's program, illustrating what can be done to update perfection, while Adolfo's own "Tres Meninos" buddies well with Chick Corea's "Crystal Silence" and Bill Evans' "Time To Remember," closing Finas Misturas in fine fashion.