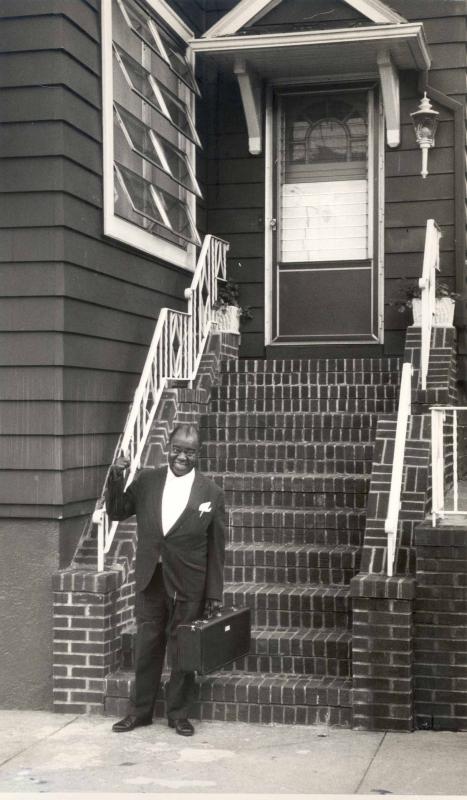 September, 2012 is final call to catch Genius at Work: Louis Armstrong in the Recording Studio, the currently featured exhibit at the Louis Armstrong House and Museum in Corona, Queens, New York. "Records as well as photographs, scores and other artifacts reveal Armstrong hard at work recording his masterpieces," Jen Walden, a museum spokesperson tells me. "These treasures give you an inside look into what went on at the sessions, allowing you to listen to Armstrong's timeless music with fresh appreciation." A guided, 40-minute tour also pauses at Satchmo's 1961 summit meeting with pianist/composer Duke Ellington, rare photos and sheet music from the epic 1954 album Louis Armstrong Plays W.C. Handy (Columbia/Legacy), and a picture and score from a 1941 Hot Seven date for Decca. There are hot jazz concerts in the cool outdoor house garden. A National Historic and New York City landmark, LAHM is the world's largest archives devoted to a single jazz musician. Check out Pops' lively home page.

The Satchmo Award, one of jazz's highest honors, was presented this spring at the 32nd Sarasota Jazz Festival to 96- year-old Svend Asmussen. The great Dane was honored "for your unique and enduring contribution to the history of jazz." Asmussen is the oldest living musician to have shared the stage with pianist Fats Waller, clarinetist Benny Goodman, "my mentor," violinist Stuff Smith, singer Hoagy Carmichael, harmonica master Toots Thielemans, pianist Kenny Drew, and a raft of old and much younger names. A stroke hampered his bowing arm—although, Svend quipped, "I gave it about 90 years." The Viking fiddler was 93 when he cut his last Arbors Records album, Svend Asmussen: Makin' Whoopee! ... and Music! in 2009. Earlier award winners have included Ellington, bassist Milt Hinton and singer Ella Fitzgerald.

All Scandinavian nations, as well as Iceland and some other European countries, offer generous state support to jazz endeavors. Earlier this year, a two million Danish kroner ($326,000) "vitamin injection" was divided among the creators of 140 Danish music projects, mainly CD albums, by The National Art Council's Music Committee. Support was granted to projects the committee deemed to be of "special artistic quality." Forty out of 140 were jazz ventures. Enterprising Danes can seek additional support from other sources, such as the Ben Webster Foundation. The iconic tenor saxophonist lived in Copenhagen for the last eight years of his life, and was buried in the prestigious Assistens Kirkegaard, a short walk from Hans Christian Andersen's grave. Royalties from saxophonist Ben Webster's many recordings are willed to the foundation. The first annual Ben Webster Prize was awarded in 1977 to Webster's protégé, Jesper Thilo, the little country's leading tenor saxophonist.

"My Freaky Brother With the Jazz Collection"

In a "Dear Abby" letter, the writer lists one family's scandals: Gram and Gramps serving time for tax evasion, dad awaiting trial for murder, mom hooked on crack, sis having her 32nd child out of wedlock, and the kid brother has a couple of thousand jazz records. How can Abby explain the freaky brother with the jazz collection? A Colgate University woman broadcaster and columnist reports that her experiences, and those of countless jazz fans, confirm this "familiar absurdity." Slim, as she's known, recalls in Cadence magazine, that "the pivotal moment I became self-conscious about my jazz 'habit.' I was in the seventh grade (in a town so square its square squared) and invited my best friend over...after school. I had been listening to a lot of Cab Calloway recordings and couldn't wait for her to hear them. About halfway through 'Minnie the Moocher' ... she looks at me ... and says, 'Don't you guys have a television?' (Loose translation: 'I'm bored.') I was dumbfounded. How could you not at least want to attempt to say 'Hi-de-ho'? How could you let Cab down and shirk your call-and-response duties mid-song? I thought Cab was infectious; my friend thought he was a freak. Clearly I was going to have to keep my taste in music a secret if I was going to survive high school."

Webinar on State of Jazz Journalism

"Introducing Jazz Journalism Now," a free, three-part webinar, has been posted online. Log on and add your two cents. Howard Mandel, president of the Jazz Journalists Association and moderator, says musicians, producers, presenters, publicists, and "curious fans and friends" will also be interested. Other panelists: NEA Jazz Master Dan Morgenstern, contributing editor of Jersey Jazz; Patrick Jarenwattananon, National Public Radio music staff writer and blogger; and Matt Kassel, a young contributor to The Wall Street Journal. They contrast the old and new. All three parts (about 30 minutes each) can be found here.