By EDWARD BLANCO
November 25, 2010
Sign in to view read count 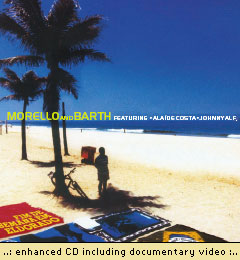 After a temporary move to Ipanema, Brazil in the fall of 2001 and a full immersion into the melody-rich music of the bossa nova and samba, German guitarist Paulo Morello and Danish alto saxophone Kim Barth capture their Brazilian experience on Fim De Semana Em Eldorado (Weekend In Eldorado). Recorded in Rio de Janeiro in 2001, the album features two legendary figures of the bossa nova, vocalist Johnny Alf—considered the true father of the genre—and Alaide Costa, viewed as the "Billie Holiday of Brazil."

The duo—who drew inspiration for this project from their apartment, located just a couple of doors from the home of the legendary Antonio Carlos Jobim in Rua Nascimento—blend authentic original sambas with fresh new arrangements of several bossa nova standards in a fourteen-piece creation of exotic Brazilian music. Aside from the two vocalists, many of the Brazilian musicians invited for this date, are regulars from the Leny Andrade band with guests appearances from pianist Jermaine Landsberger, bassist Wolfgang Stadler and flautist Jorge Continentino.

Bassist Lucio Nascimento highlights the perky samba opener "Samba I," with Barth providing a sizzling alto solo in accompaniment to Joao Carlos Coutinho on the Fender Rhodes. The samba colors continue on the airy "Luciana" with Morello laying down the first of his many George Benson-like cool guitar riffs. Other samba pieces include the lively "Pe Quebrado," and the blazing "Samba Horizontal." Singers Costa and Alf team up on the beautiful and light "O Que E Amar," and on Costa's 1959 hit "Choro Tua Tristeza." Alf is featured alone on the moving bossa title track while Costa takes the solo on the warm "Outra Vez."

The entire album is worth spinning repeatedly but, like most albums, there are the extra exceptional tracks and they include "Eu Te Vi," where the saxophonist is particularly expressive, the delicious soft ballad of "Balada Pra J." and the gentle bossa nova magic of "Songuito." Whether favoring a smart bossa or a hot samba jam, the European combo of guitarist Paulo Morello and alto saxophonist Kim Barth put it all together in Fim De Semana Em Eldorado, a weekend at Eldorado where it's obvious they found the gold with this one.

About Morello and Barth