By JACK BOWERS
September 1, 2001
Sign in to view read count 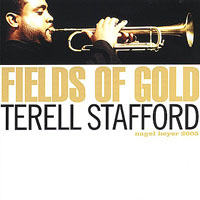 Although trained nurses, qualified schoolteachers and genuinely funny TV sitcoms may be scarce these days, there’s certainly no shortage of talented young Jazz trumpeters. Roy Hargrove, Terrence Blanchard, Nicholas Payton, Ryan Kisor, Wallace Roney, Jim Rotondi, Russell Gunn, Ingrid Jensen, Scott Wendholt, Marcus Printup, Randy Sandke, Joe Magnarelli — the list is almost as long as one’s arm. And then there’s Terell Stafford, too often overlooked but no less able than the others on that list, an endorsement he validates with ease on his third album as a leader, Fields of Gold. If one were to draw a line from Louis Armstrong to Bunny Berigan and Lips Page, past Diz and Brownie, Howard McGhee and Fats Navarro, and on past such early hard–boppers as Lee Morgan, Woody Shaw, Kenny Dorham, Freddie Hubbard and Donald Byrd to embrace today’s eager young lions, it would stop at the business end of Stafford’s horn. That he means business is readily apparent from the outset, as Stafford and his co–workers (alto Antonio Hart, pianist Bill Cunliffe, bassist Kiyoshi Kitagawa, drummer Rodney Green) come out smokin’ on Victor Lewis’s “Hey, It’s Me You’re Talking To.” Even so, Stafford saves his most impressive solo for last, merrily dancin,’ singin’ and throwin’ lightning bolts on a stormy version of “September in the Rain.” That’s one of four standards on the menu (the others are “Ill Wind,” “That’s All” and Frank Loesser’s hymn to narcissism, “I Believe in You”) complementing two originals by Stafford (“Dear Rudy,” “Ms. Shirley Scott”), one each by Cunliffe (“Minnesota”), Hart (“Flashdance”) and Kitagawa (“Sagittarius”) and two traditional themes, “If I Perish” and “His Eye Is on the Sparrow.” Fluent and resourceful as he is at faster tempos, Stafford is properly warm and dreamy on the ballads and perfectly comfortable with the blues, as he shows on “Shirley Scott,” written for the friend and mentor in whose group he cut his professional teeth. He is pushed hard in every circumstance by his earnest soul–mates, Hart and Cunliffe, who forge some audacious solos of their own, with Cunliffe sparkling on piano (eight numbers) and organ (“Shirley Scott,” “Ill Wind,” “If I Perish,” “Sparrow,” “I Believe in You”). Kitagawa adds his resonant voice on “Dear Rudy” and “Sparrow” while Green trades fours with Stafford and Hart on “September.” Fields of Gold should serve to solidify Stafford’s place in the front ranks of today’s most prominent young trumpeters.

Hey, It's Me You're Talking To; Minnesota; Dear Ruby; Ms. Shirley Scott; Ill Wind; If I Perish; Sagittarius; I Believe In You; His Eye Is On The Sparrow; Flashdance; That's All; September In The Rain.