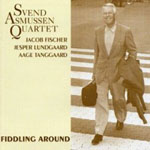 While striving to avoid clichés like the plague, there seems only one way to describe Danish jazz violinist Svend Asmussen: he is still going strong. At the age of 92, "the fiddling Viking" is embarking on a 2008 tour of Scandinavia. Fiddling Around, recorded when he was a mere slip of a lad, age 77, has been re-released by the small Gothenburg label Imogena to mark the event. Listening to it, it seems such a drag that Asmussen turned down an offer from Benny Goodman in the late 1930s to join one of his small groups.

The thought of hearing him play alongside the likes of Goodman, Lionel Hampton, Teddy Wilson and Gene Krupa...wow, man! But the Dane was happy to be a big fish in a small pond.

For good or ill, he made his life on the local variety scene, clowning it up for the punters. Some acts were better than others. At the high end: the appallingly named Swe-Danes, with Swedish vocalist Alice Babs and guitarist Ulrik Neumann. At the low: acts in which he told clumsy jokes and his fiddle became just another sound effect along with gunfire and hoof beats.

But, if he ever felt all this to be beneath him, Svend (the "d" is silent) never let it show. The man who played with Goodman, Duke Ellington and Lionel Hampton and jammed with distinction alongside fellow fiddlers Stuff Smith (his particular idol), Ray Nance, Stephane Grappelli and Jean-Luc Ponty actually seemed to enjoy hamming it up, as much as Satch used to do.

His playing on this album is fresh and ageless, as invigorating as the spring breeze drifting in over Copenhagen off the icy waters of Oresund. His style is instantly recognizable. Asmussen says this is because he plays more like a horn player than a "real" violinist.

There's Tin Pan Alley bluegrass in the shape of J. Fred Coots' "Alabama Barbecue"; a little ditty by that up-and-coming composer Pyotr Tchaikovsky, "Chanson Triste"; and seven of Asmussen's own compositions—plus a reworking of Ray Noble's "Cherokee," which he first recorded in 1943, the year he was arrested and imprisoned by the Nazis for playing "decadent" music.

While it must be daunting to play with a living legend, guitarist Jacob Fischer—25 when this was recorded—puts in sterling work throughout, notably on two Asmussen Latin originals, "Fiddler in Rio" and "Calypso Columbo." There's some nice bass work from Jesper Lundgaard on "Stardust" and the traditional Danish number "Nackens Polska," while on "Batida Differente" drummer Aage Tanggaard takes a rare break.

The only jarring number is Asmussen's tribute to his hometown, "The Little Mermaid," which incorporates Frank Loesser's ghastly "Wonderful Copenhagen." I guess Asmussen felt he had to keep the locals happy. He's been doing it so long it must be second nature by now. Such a shame he didn't call Goodman!