By GLENN ASTARITA
November 24, 2013
Sign in to view read count 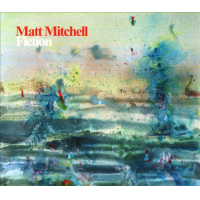 Pianist Matt Mitchell and drummer Ches Smith align for a rather remarkable program as Fiction offers additional credence to the respective artist's increased stature in the progressive jazz community and A-list session status. Among their extensive resumes of group affiliations, the instrumentalists are members of saxophonist Tim Berne's Snake Oil group.

Mitchell originally composed these works in 2010, citing them as "musical puzzles." The comprehensive nature of these concise etudes seemingly involves a vast amount of metadata (notes). Initially, he wasn't concerned "whether anyone besides himself would actually be able to play them." However, he executed these pieces with Smith as warm-ups prior to performances with Snake Oil, leading to this release.

Indeed, fascinating and largely different than any piano- drums duet I've ever heard, Mitchell's geometrically engineered tomes contain a myriad of odd-metered phrasings and unison lines. It's meticulously crafted, and abetted by numerous parts where the duo bangs out some intense and quirky improvisational segments. Regardless, their intuition and synergy is quite impressive. The musicians' zigzag across the program while also engaging circular motifs via alternating cadences—as if they're navigating through a maze. With numerous spikes, dips and staggered flows they exude dissonance and melody amid the topsy-turvy song-forms.

"Singe" is a piece that stops and restarts, complemented by the artists' clever trade-offs and mimicking exercises, but Smith lays on the bass drum and executes a host of polytonal cymbals hits as Mitchell raises the pitch and switches octaves. Smith uses the vibes within various segments, providing supplementary hues and textures. And "Nightmare Tesseract," features the pianist's clamoring block chords, tinted with a dour forecast and Smith's bustling drums patterns that insinuate a heightened sense of urgency. Nonetheless Fiction tenders huge quantities of brain candy, akin to a shot of adrenaline that will keep the willing listener on the edge of his or her seat. Passionately recommended...