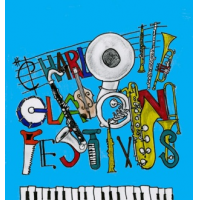 This exceptional album succeeds on several levels. First there's Glasson herself, an undeniably, prodigiously talented multi- instrumentalist whose diverse armamentarium would successfully rival that of Rahsaan Roland Kirk's, maybe substituting his stritch for her saw. The nine tracks here all benefit from Glasson's imaginative arrangements for which the word "quirky" would be hardly adequate.

Glasson is accompanied by some excellent musicians including Chris Spedding who first made his name in the jazz world with the likes of Ian Carr's Nucleus, Mike Gibbs and Jack Bruce before launching his own career. Also present is Dave Holdsworth, who started out as doyen of the trumpet in Mike Westbrook's early big bands and here also doubles on sousaphone. Trombonist Mark Bassey is an alumnus of the Mike Westbrook and Graham Collier bands, whilst brother Sam Glasson takes care of the drumming side.

The foot tapping opener "Blue Tuesday" is devoid of a rhythm instrument (save some finger clicking) but swings like anything, even managing to impart a threatening undertone of menace. The bouncy "Festivus" demonstrates how unconventional instrumentation (including whistling) doesn't necessarily have to sound like aural torture (in the name of art), it can also be fun.

The deceptively tentative beginning to "Early Days" dissolves into a relentlessly melodic groove over which Glasson solos on flute. Chris Spedding employs a Duane Eddy-style guitar opening to the catchy "Travelling Band" which includes a soulful trombone solo from Mark Bassey. The jaunty "Oscar (the Black and White Cat)" has a relaxed township feel whilst the hypnotic "Ngoni Man" provides a veritable feast of delicate percussion. The off-the-wall opening to "Sparky," with Glasson vocalising a drum part, slowly builds to a rousing anthemic crescendo.

This album represents a truly eclectic mixture and instantly engaging set due to its diverse nature and relatively eccentric instrumentation. The use of pastiche, emulating historic roots of jazz, as with the deft employment of the sousaphone, successfully combines these elements with a unique contemporary sound.

Glasson is a phenomenally versatile virtuoso and, with the aid of seamless multi-tracking, is more than equal to the task of performing many of the parts on these nine numbers. One example is the lugubrious, haunting "Sweet Dreams (for Cosmo)" where flute, bass clarinet, violin and percussion gently vie for a few bars with the ethereal strains of a bowed musical saw. The perky "Chai Latte" closes this extraordinary album and still manages to squeeze in some fine solos including Chris Spedding on wah wah guitar.

The heterogeneity of each of the tracks combined with the sheer inventiveness of the compositions makes this recording an extraordinarily satisfying one and which both surprises and delights.