Sunday afternoon was relegated to sounds of the European persuasion. Jacques Demierre's and Urs Leimgruber's Six opened the day, and The Trondheim Orchestra under Kim Myhr followed. As much of this quiet, intimate minimal music tends to be, these two acts were quite insular and place-specific, whether "place" in this case be interpreted as present venue, or nation of derivation. However this may be, something gets lost in translation, and it is difficult to evaluate intentionality and integrity in its appropriate artistic context. 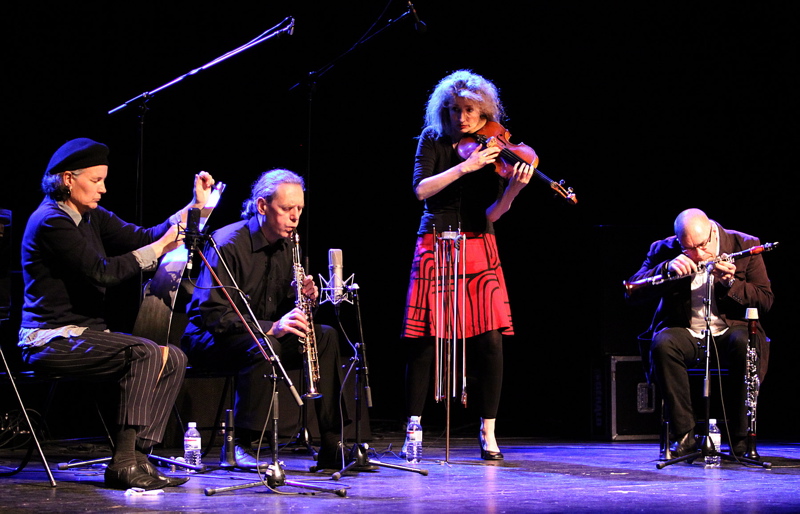 That said, Six pulled some amazing tricks out of its various hats, between bouts of near silence. It would be assumed that the silence was there for dramatic contour, to give the outbursts of activity more meaning, but as often as not one hankered after the latter during the former, which did not seem to summon up the expected drama as planned. Again, sparkling pearls were to be discovered in the oysters found in the wide-cast improvisatory net, yet they were scant, however special. Still, it could be argued they were special enough. Likewise, the Trondheim Orchestra produced its precious moments, passages of great lyrical beauty in the midst of wastes of dissonance liable to leave one at sea.

Poet Anne-James Chaton joined forces with The Ex guitarist Andy Moor for an early evening of text cutups and guitar shredding. The texts were all in French, but Chaton delivered them in a mellifluous bass and eked out drama in various ways, including using a small megaphone and artfully tossing the pages of print on the floor after reading each. Moor wasn't after pyrotechnics as a guitarist. Yet, he was keenly tuned to the textual experiments next to him and delivered a series of licks and riffs that started out like badly cut pasta, incrementally gathering speed until towards the end he was offering classic, blues drenched psychedelia. Very fine. 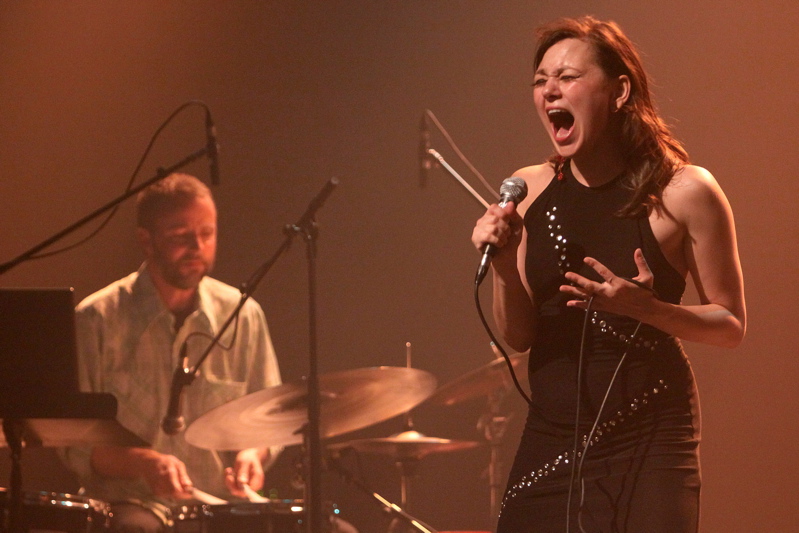 Tanya Tagaq, an Inuit throat singer, was as glamorous as they come, sporting a tight black dress tonight with a V-stripe of silver sequins. A true beauty, she was also the ultimate misfit, her gutteral effusions accompanied by sexually suggestive histrionics too offbeat, or, "weird," in her own words, for the mainstream, yet too downright entertaining to be counted outright "arty," as much if not most of FIMAV fare qualifies. Accompanied by Jesse Zubot on violin, and Jean Martin on drums, her set was quite ingenious rhythmically as well as melodically, statically frozen beats seeming to go no where, and then breaking into borderline funk. Her singing itself ranged from crystalline folk lyricism, to mad, math rock-like, and rollicking, workouts at once jarring and invigorating.

Renee Lussier capped off FIMAV 26 grandly. A self-taught guitarist, Lussier is a cultural treasure to Quebec and to Victoriaville in particular, having performed at its first installment in 1983. He led a stellar, all-star cast of all-Quebecois musicians, including Turntablist Martin Tetreault, Clarinetist Lori Freedman and drummer Michel Langevin, who had distinguished himself previously in this year's festival with Aun. Stylistically, Lussier is all over the map, but tonight he focused on a kind of prog jazz-rock fusion, together with some collage or cut-and-paste effects. Lussier gave the accompanists opportunity for solos and duos, maintaining remarkable stylistic unity while at the same time allowing all individual voices to shine. At times, he veered toward the classiest form of heavy metal, and the highlight of his set for me was a straight-out, meat and potatoes boogie, a refreshing relief from a gloriously abstruse festival, God love it, perpetually on the verge of taking itself too seriously.