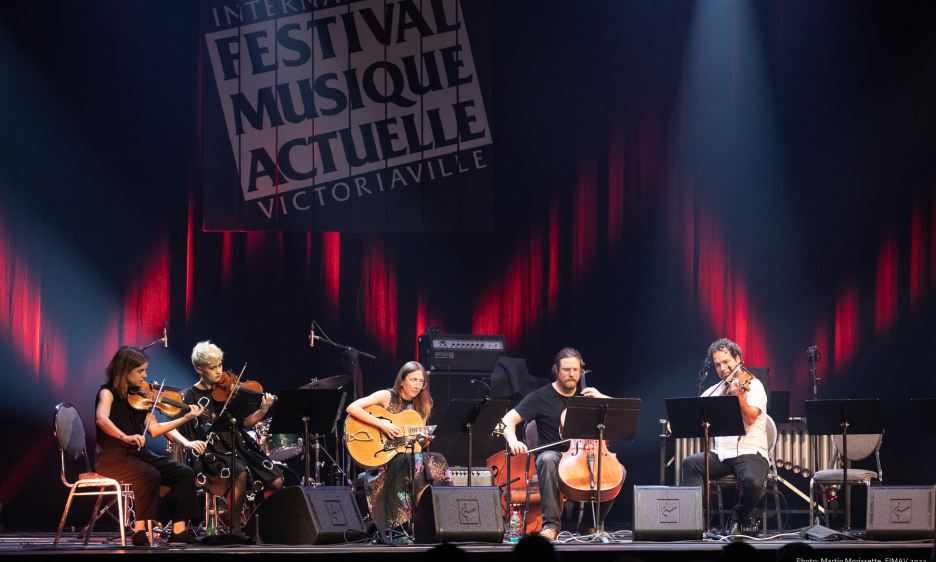 The weekend of May 19-22, was the first time since 2019 that artistic director Michel Levasseur and the team at the Festival International de Musique Actuelle de Victoriaville (FIMAV, or Victo, as it is popularly known) were able to mount a full program of concerts and other presentations (sound installations, films) without tight pandemic restrictions. This meant that, unlike last year, musicians and music lovers from outside Quebec and Canada were able to attend the festival and participate in its various activities.

Apart from being able to attend a full program, the weekend gave those who come to Victo every year the chance to reconnect with friends from across the border and overseas, which is a pleasure as great as the opportunity to hear music at a festival dedicated to the highest-quality presentation of music.

The lineup was impressive on paper, but it's never a sure thing that potential will be realized—and that's not a bad thing. FIMAV is a festival of adventurous music, and failures are often remembered as well, if not as fondly, as successes. That said, this year's edition of the festival more than lived up to expectations.

FIMAV is a world unto itself for the four days of the festival, but the real world does intrude from time to time, this year in the cancellation of two performances, one by Spanish artist Fatima Miranda and the other by the Ukrainian singing group Dakh Daughters, who were slated to perform on the first evening. In the first case, Japanese voice artist Koichi Makigami replaced Miranda, and the Dakh Daughters place in Thursday's program was taken over at the last minute by bassist William Parker's Mayan Space Station.

Egyptian-born singer Nadah El Shazly, who opened the festival, moved to Montreal from Cairo about a year ago, and in her performance was joined by guitarist Radwan Ghazi Moumneh, Sam Shalabi on oud, Sarah Pagé on harp, and Jonah Fortune on bass. The music unfolded slowly, trance-like and hypnotic throughout.

Mayan Space Station, with (for this date) drummer Francisco Mela and the project's regular guitarist Ava Mendoza, who was already scheduled to appear at the festival, engaged in a set of free jazz, with all three musicians locked into a freewheeling groove. William Parker takes a back seat to no one as a musician, but both Mendoza and Mela were very impressive, with Mendoza firing off high-speed runs of notes and Mela inventively accenting the playing of Parker and Mendoza. Indeed, Mendoza appeared to be in take-no-prisoners mode in both this performance and with drummer Sean Noonan's Pavees Dance project on Friday evening, when she locked in with bassist Jamaaladeen Tacuma over Tacuma's thundering bass and drummer Noonan's funk in a memorable encounter.

While Mendoza's guitar playing was a highlight of the first two nights of FIMAV, another guitarist (and composer), Mary Halvorson, was front and center on Saturday night in a concert that presented two of her projects, Belladonna and Amarlyllis. Belladonna is a project with the Mivos Quartet, a string quartet comprised of Olivia DePrato and Maya Bennardo on violin, Victor Lowrie Tafoya on viola, and Tyler J. Borden on cello, while Amarlyllis is a sextet with Halvorson, Adam O'Farrill (trumpet), Jacob Garchik (trombone), Patricia Brennan (vibraphone), Nick Dunston on bass, and drummer Tomas Fujiwara. The performance opened with six pieces by Halvorson and the Mivos Quartet, then a set with the Amaryllis group, and finally a set with all musicians. The whole concert was fascinating, with the Amaryllis group smoother and more fluid. The harmonic interplay between Halvorson and Brenna was intriguing, and Adam O'Farrill's trumpet playing was old-school cool, with a beautiful tone and phrasing.

The midnight shows at Victo generally lean toward rock, and this year was no exception. In Thursday's midnight show, the guitar quartet Dither (Gyan Riley, Taylor Levine, Joshua Lopes, James Moore) ran through a set of intricate and dynamic pieces. The avant-rock of the trio Mopcut, with Julien Desprez on guitar, drummer Lukas König, and vocalist Audrey Chen (both König and Chen also used electronics, and Desprez had many guitar pedals at his disposal) captivated an almost full house on Friday. Saturday's show brought out the metal heads to hear the trio Bloodmist, whose doom rock left the audience quite satisfied.

While Sunday afternoon's set by the octet Pangea de Futura fit firmly into the metal experience, its minimalism, its slow buildup and accretion of sounds and frequencies in fact somehow also echoed the minimalism of the music of Montreal composer Simon Martin presented by the quintet of Jean Rene, Lyne Allard, Victor Fournelle-Blain (violas), cellist Émilie Girard-Charest, and bassist Etienne LaFrance just before it at l'Eglise St-Christophe d'Arthabaska. Long tones intersected, diverged, converged and finally built to shimmering climax. A fascinating concert.

In recent years, the 1 o'clock afternoon concerts have taken place at l'Eglise St-Christophe d'Arthabaska, whose acoustics make the venue perfect for small acoustic ensembles and solo performers (and not so good for the backsides of the audience). Quasar, a Montreal-based saxophone quartet, filled the church with sound on Friday afternoon in a set that featured compositions by a number of composers, including Iannis Xenakis' only composition for saxophones, titled "Xas." Voice artist Koichi Makigami presented a charming and funny set on Saturday, using both his voice and small instruments such as a jaw harp in a series of short pieces.

Every edition of Victo contains pleasant surprises. Standouts this year were the sets by the A, Montreal collective No Hay Banda, and the saxophone duo of Colin Stetson and Mats Gustafsson.

The A Trio is comprised of Lebanese musicians Mazen Kerbaj (trumpet), Sharif Sehnaoui (acoustic guitar), and Raed Yassin (bass). Eschewing almost all notions of playing their instruments in a conventional manner, the three musicians built an insistent mood of color and a bit of whimsy. Kerbaj's use of the trumpet was captivating and at times quite amusing, with a visual as well as a sonic aspect to it.

No Hay Banda presented two compositions, one by Ida Toninato and the other by Navid Navab. Of the two, Toninato's was the more compelling, a minimalist piece that demanded attention from the beginning. Navab's performance was somewhat enigmatic, as the performer employed a Casavant organ but in a manner that was more visual than musical.

One might have expected a set of raucous blowing and circular breathing from Colin Stetson and Mats Gustafsson. While Stetson did engage in some of the latter, their performance was quite pleasingly varied and even subtle. Gustafsson alternated between baritone sax and flute, while Stetson employed bass and alto saxophones, and both explored a number of techniques on their instruments.

That set preceded the festival's closing performance, a 100-minute presentation by oud and guitarist Gordon Grdina with two of his groups, The Marrow (with Grdina on oud, bassist Mark Helias, cellist Hank Roberts, and percussionist Hamin Honari) and Square Peg (with Grdina on guitar, drummer Christian Lillinger, bassist Shazad Ismaily, and Mat Maneri on viola). The two groups played separately and then combined to play a final set. The FIMAV faithful left the concert hall and the festival happy and looking forward to the next edition.

One final note: The last five or six editions of Victo have featured a film program, with two sets of shorts on Saturday and Sunday morning and a presentation of Tom Surgal's film Fire Music: The Story of Free Jazz, in a Quebec premiere, as part of the regular program on Sunday afternoon. Surgal's film was curious, and poorly-titled, for it covered free jazz with a New York centric focus up to the 1980s, while ignoring everything that has occurred in free jazz since then. The film was released in 2021 but could have been made in 1985. What a strange thing to show a film with Peter Brötzmann in it and fail to make direct connections between musicians like Brötzmann and younger players like Mats Gustafsson, who played in the same room later that day. If the film was meant as a corrective to Ken Burns dismissive handling of free jazz in his documentary series Jazz, it did to the second and later generations of avant-garde jazz musicians what the Burns series did to the first generation.

Indeed, what was left out of Fire Music is what has happened at Victoriaville since it began in 1984. Thirty-eight editions in, the festival is still presenting new and exciting music by new generations of musicians. Those who attend FIMAV every year desperately missed the festival during the pandemic (notwithstanding last year's truncated edition), for the social connections and for the music. But FIMAV is back, and it came back with one of the best editions in the last twenty-some years.