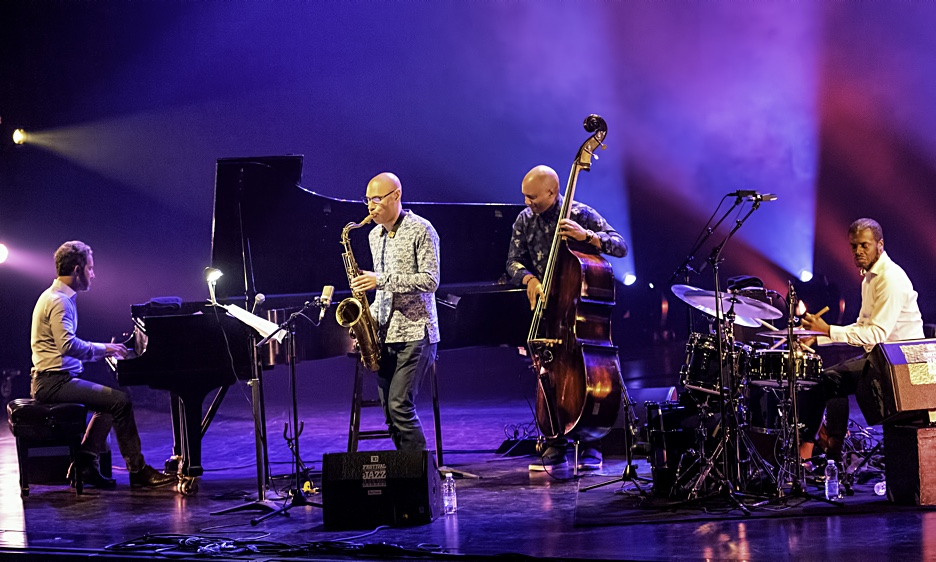 The festival celebrated its 40th anniversary this year with the usual dazzling array of musical offerings. And a few that were unusual: including concerts celebrating the 50th anniversary of ECM Records (founder Manfred Eicher was awarded the Bruce Lundvall Award, presented annually to a non-musician who has left a mark on the world of jazz or contributed to the development of the music, through the media, the concert or record industries); Canadian jazz singer Holly Cole's residence with her classic trio; and Richard Reed Parry's Quiet River of Dust, an immersive multimedia experience from the Arcade Fire band member.

Virtuosic French guitarist Bireli Lagrene began the "Django Reinhardt Cycle" for the Invitation series at the beautiful, intimate Gesù with a solo acoustic guitar performance. The official festival program promised that he would "pay tribute to his idol as a soloist," which turned out to be mainly in spirit, as no Django compositions were played. Lagrène came onstage with an electric-acoustic flat top guitar, which may have had at least some gypsy jazz guitar design elements (hard to tell visually).

His world-class technical facility was on display immediately, improvising on a standard. At one point he briefly changed his guitar tuning (scordatura) on the fly. The second tune was fast and bluesy, with use of harp harmonics. In one section he employed a reverb pedal to alter the guitar sound, the first use of electronics (which were more prominent later in the set). After a ballad, he addressed the audience briefly (in French, without a microphone), saying how much he loved to come to Montréal. An audience member called out "Django!" Lagrène shrugged and said something too hard to hear—but no Django tunes were forthcoming.

The next piece began with a fast muted sound like galloping horses. He managed to play melodic lines while maintaining the muted strumming through the entire song. "All The Things You Are" was played as an up-tempo fantasia on the classic tune, ending with a humorous fanfare. He began the next selection moving firmly out of Django territory by employing a looping pedal to record a rhythm part, which he then soloed over. Transitioning to a second, faster loop, he began adding ostinato lines to the loop, resulting in a dense multi-guitar texture. For an encore he played a stately chord-melody piece, again employing live scordatura re-tuning, as well as a section with digital delay.

Lagrène's guitar technique cannot be overstated: it is truly awe-inspiring, and is balanced by a bit of puckish humor, if not always emotional resonance. As with many virtuosos, he sometimes appears to be more interested in exploring technical challenges than playing expressively.

Austrian pianist David Helbock has several ongoing projects, but his trio Random/Control is the longest-running and most unusual. He plays electronics and percussion as well as the piano; Andreas Broger plays saxophones, clarinets and various reed instruments; Johannes Bär plays tuba, trumpet and various brass instruments. Even that extensive list does not fully capture the instrumental combinations that occur in performance. For this outdoor show on the Place Heineken stage the group focused on the music from their latest album Tour d`Horizon -from Brubeck to Zawinul (ACT Music, 2018), which focuses on great jazz pianists who have been Helbock's role models.

The set began with Abdullah Ibrahims "African Marketplace." Keith Jarrett's "My Song" began with piano, bass clarinet and trumpet, but Bär switched to trombone for some sections. There was a tremendous rhythmic buildup, at which point Helbock stopped to introduce the musicians and the music they were playing. Cedar Walton's "Bolivia" began with all three musicians gathered around the piano, playing inside and outside. For the body of the song the instrumentation was piano, soprano saxophone and tuba. In addition to tuba Bär provided both small percussion instruments and human beat-boxing, which he excels at.

Swedish pianist Esbjorn Svensson's "Seven Days of Falling" was combined with a Helbock composition. The arrangement included a small electronic beat box: at one point Helbock played it by raising his foot onto the table while still playing the piano with both hands. Addressing the audience, Helbock said they were Austrian, but the famous alp horn was too large to bring on the plane. So Bär duplicated the sound with a coiled hose and a tuba mouthpiece, and was joined by Broger on trumpet. The sound they created turned out to be an introduction to saxophonist Paul Desmond's famous "Take Five" (associated with pianist Dave Brubeck). Broger played the head on tenor saxophone, switching to soprano saxophone for the bridge. When Helbock finally introduced the classic piano accompaniment riff the performance took off like a carousel ride.

This group is really something special. Three remarkable musicians who create a kaleidoscope of sound, and are visually entertaining to boot.

Bass guitarist Alex Lefaivre's YUL Quartet was nominated for the TD Grand Jazz Award (which is awarded to young Canadian jazz artists), which gave the group the unenviable task of opening for the beloved Joshua Redman Quartet. They are a contemporary jazz band made up of Erik Hove (alto saxophone), Nicolas Ferron (guitar), Mark Nelson (drums) and the leader on electric bass & compositions. After their opening tune, which had a distinct ECM vibe, he acknowledged as much, asking the audience "are you looking forward to hearing Joshua Redman as much as I am?" They then launched into a very creative interpretation of the theme from filmmaker John Carpenter's horror film Halloween. Beginning with the creepy theme—which the crowd immediately recognized—the arrangement opened up into an improvisational vehicle. They closed their brief set with a sort-of ballad, again with that rhythmic feeling of ECM-style rubato.

Joshua Redman was presented with the Miles Davis Award (which honors a great international jazz musician for the entire body of their work and influence in regenerating the jazz idiom) by Festival co-founder and Artistic Director André Ménard before his set. Both men managed to mix up the names of Redman with his father Dewey Redman, who was responsible for Joshua's first appearance at the festival in 1991. After remarking on the physical weight of the award statue ("how am I going to get this thing home?"), Redman was happy to get on with the performance.

Much of the song list came from the quartet's current album Come What May (Nonesuch Records, 2019), the third in the group's twenty-year history. Redman played a long unaccompanied tenor saxophone introduction to "Circle Of Life," before the group launched into its long-line theme. At times the music almost sounded through-composed, with seamless transitions from written to improvised. It was the first indication of just how attuned these players are to each other, with perhaps an additional boost from the attentive audience and the occasion. "How We Do" moved from a start-and-stop theme into fast swing, and kept that contrast going throughout the solos.

Redman paused to announce the songs and introduce the band members, saying that he had played more gigs with these three players than any others in his career. He also complimented all of the Canadians present on the Toronto Raptors' first NBA championship, commenting "you just get one." "Come What May" featured a lyrical (and bluesy) double bass solo from Reuben Rogers. An Aaron Goldberg original began with his unaccompanied piano. Even after the rest of the rhythm section joined the arrangement stayed fluid: after more piano solo with light percussion only, the trio returned, finally leading into an unaccompanied drum solo by Gregory Hutchinson.

Legendary bebop saxophonist Charlie Parker's "Chi Chi" displayed the band's bebop prowess. At one point it dropped back to a piano/bass duet, and the climax found the whole band trading fours with the drums. The standard "Skylark" featured another long unaccompanied saxophone introduction, perhaps recalling the great Sonny Rollins. "Stagger Bear" (named after a weird dream Redman had about a drunk teddy bear) was opened by the bass, and featured saxophone and piano trading fours. For an encore the group returned with a Swing-era jazz standard.

A remarkable performance, highlighting the trust and generosity these players have developed over the years. There was always room for surprise, for players and audience alike.

The third tune had a neo-soul groove. Guitarist Morgan Burrs finally made his presence felt in a big way, with a long chordal guitar solo that brought Jimi Hendrix to mind. "Gum in my Mouth" (from a completed future album release) was a long, wild ride. It began with Tenney rapping over the rhythm section, then a pause for a bass solo with whammy pedal and lots of arpeggiated chords: very guitar-like. After a saxophone melody and more jamming, Tenney switched to trumpet for a rousing new theme. Very impressive: it is rare to hear a player accomplished on both saxophone and trumpet. Another trio segment featured an over-driven guitar solo.

Butcher Brown is a real band, something that has become rare in the jazz world. And they have done it playing mainly instrumental music, an eclectic blend of jazz, funk, soul, rock and hip-hop.

The "Django Reinhardt Cycle" continued with French guitarist Stephane Wrembel, who has made a series of albums with his band entitled The Django Experiment focusing of Reinhardt's compositions as well as other music in the same stylistic vein. The guitarist came onstage alone, and gave a long talk (in French) about the musical influence of the French classical Impressionist composers (e.g. Claude Debussy and Maurice Ravel) on Django's music.

He began the set with three solo performances. They included "Improvisation No.2" (he noted the Debussy influence), which was a technical marvel. Played finger-style, it included rasgueado strumming, scordatura re-tuning, and artificial harmonics. He described Django's "Echoes of Spain" as being more like a distant memory, but the Spanish atmosphere was palpable.

Joined by his band (2nd guitarist Thor Robert Jensen, electric bass guitarist Ari Folman-Cohen and drummer Nicholas Anderson) he plugged in his guitar's pickup, which gave him a slightly more "electric" sound for the rest of the set. They began with a musette, a waltz-based form that was popular when Django was growing up, followed by "Gin Gin." Next was a little medley of two waltzes, one older and one more recent. The second was played very fast, and ended with a flourish.