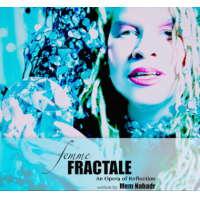 Music genre categorization has exploded into so many fragments, that shrapnel is strewn in all directions as far as the ear can hear. In examining the vast minefield of definition for a proper description of the music of Mem Nahadr, we excavate the terms "neo-soul meets free-jazz," in hopes of further reference. Blessed with an operatic vocal range and fathomless ability of expression, Nahadr is an ever evolving artist on a constantly progressive and perpetual trajectory and Femme Fractale -An Opera of Reflection, is a complex production of aural textures yielding to a soothing backdrop of possibilities.

As with her highly regarded 2009 release "Eclecticism," and her mesmerizing live performances, this record pushes the boundaries of where vocalization can go. With no lack of material, and clocking in at over seventy-five minutes, Nahadr sets this up as a consciousness streaming opera, arranged in overlapping arias, with a profound sense of trendy groove. Utilizing all the modern studio tools at her disposal, she, along with producer/sound guru James P. Nichols, have managed to keep a secure hold on the spirit of the songs all the while enveloping them in layers of carefully adapted technological notions.

With seamless transitions from dance trance in "Grey Aria," to the mysterious "Underground," and into a light hearted "On My Merry Way," Nahadr follows a flowing current of measured tempos and mystical lyrics, which she abstractly displays as her interstitial philosophy. "Gone," sets up a deep urban groove, then in a total change of direction "Panacea," is a melodic romantic floater, presenting her multi-dimensional approach to songwriting. "Black Whole," brings out flashes of desperation cloaked in blinding optimism. She pours out the pulsing hypnotism which is her trademark in "M Theory," and wraps it up with "Passage," as her quest continues into realms yet unexplored.

This aptly named 'Opera of Reflection' is a determined and energetic project, depicting how positive energy can be channeled into music that is palatable yet vanguard, and realized with a cosmic message of confidence. Mem Nahadr is very much the modern woman who is savoring her role as a visionary artist, creating futuristic music for a contemporary audience that appreciates the effort it takes to accomplish something so imaginative.