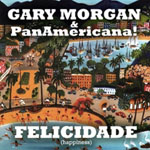 Gary Morgan's orchestrations are an absolute feast. He thrives on the diverse rhythms of Latin America and the Caribbean and his arrangements are clever and energetic. Recently he led his powerhouse big band, PanAmericana, through a show at the New York City Baha'i Center in support of their new release Felicidade. There was little overlap between the songs played at the set and those on the disc, but the lineup was the same: a combination of Morgan originals and songs by musicians who are largely unknown in America, but held in the highest esteem by Morgan and throughout Latin musical communities.

Morgan loves colorful horn bursts and robust percussion, within which soloists have ample room for expression. The first number at the show, "Samba School"—similar to the CD's opener, "Batuki Di Bangu"— is a brass riot, with funk elements rubbing elbows at the bar with the AfroBrazilian rhythm. The studio version of "Reflexos" is a beautiful ballad with a brass overture reminiscent of Miles Ahead; in concert, however, John Bailey unleashed his 'muted' trumpet and nearly drowned out the band. The haunting "Dream City," part of a suite inspired by the paintings of Paul Klee, has a seductive melody and rhythms anchored by soprano and flugelhorn that underscore the title perfectly. (The band performed another part of the suite, "Black Prince," at the show) But it's the title cut, a relentless and joyful samba by Antonio Carlos Jobim, that truly encapsulates the spirit of the disc.

One key to composing and arranging for a big band is to find a suitable balance of sounds without sacrificing instrumentation. If rhythm and instrumentation aren't coordinated properly, the result can be chaotic. Morgan's excellent composing and arranging, on stage and in the studio, supports his ability to manage these elements masterfully and produce the kind of wonderful music that he has on Felicidade.